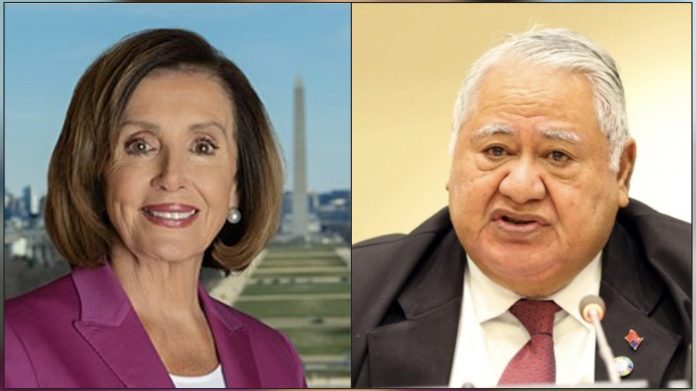 The United States Speaker of the House of Representatives, Nancy Pelosi, visited Taiwan earlier this month, in what has been described in Beijing as “playing with fire.”

A delegation of five Democratic Party members of the House accompanied Pelosi to Taiwan and stayed for just 24 hours as part of a tour of Asia that also included stops in Singapore, Malaysia, South Korea, and Japan.

President Joe Biden discouraged but did not prevent Pelosi from travelling to Taiwan, and the White House later affirmed her right to visit the island nation.

The central issue is the Taiwan Strait – a geopolitical fault-line between China and the rest of the world.

At its narrowest, the Taiwan Strait is a 130-kilometre-wide channel of water separating the People’s Republic of China from the island of Taiwan.

But the divide between Taiwan and China is more than geographic. For more than half a century, the Taiwan Strait has been one of the last vestiges of the Cold War.  It is a symbol of the division between the authoritarianism of China and the thriving democracy of Taiwan.

Nonetheless, Taiwan is also something of an international pariah. That’s because few countries officially maintain diplomatic ties with Taiwan, often out of fear of China’s repercussions.

The “One China” policy provides that there is only one China in the world — and that Taiwan is part of that China.

However, while China imposes that all countries adhere to this policy, the United States, the United Kingdom, the European Union and also Canada have merely said they “acknowledge” it.

Many countries continue to maintain economic, cultural and even military ties with Taiwan.

Pelosi’s visit, in Beijing’s eyes, was “playing with fire.”

Pelosi has also been personally sanctioned by China,

However, visits by foreign lawmakers to Taiwan are not new.

The Czech Republic’s Senate speaker led a delegation to Taiwan in August 2020, and China responded that Czech leaders would “pay a heavy price.”

The vice president of the European Parliament visited Taiwan in July 2022, and underscored the island’s “role as a global, strategic, responsible and reliable international partner.”

Pelosi is the only woman to have served as speaker of the U.S. House a position she has held since 2019, and previously held from 2007 to 2011. She has served as a U.S. representative from California since 1987.

LETTER TO THE EDITOR

Pelosi’s visit to Taiwan and it’s impact on Samoa

I was asked recently by the media on what I thought of Pelosi’s visit to Taiwan.

From the perspective of a small Island Country in the middle of this vast Pacific Ocean, whose only concern is a peaceful ocean to provide our children with daily sustenance, the visit has caused unnecessary ripples, darken the blue waters of the Pacific Ocean and brought unnecessary headaches and high blood pressure to its citizens.

The geopolitical worries and concerns of the many powerful countries of the World are matters far, far beyond our daily priorities.

As the oldest member of our Parliament and the leader of the Human Rights Protection Party, I see Madam Pelosi’s visit to Taiwan as an unnecessary interference and provocation by the Speaker on a highly sensitive and dangerous political issue impacting the relationship between the Government of the United States and the People’s Republic of China, and peace in the Pacific and the World.

As in any Democracy, the business of the Speaker is only to conduct the meetings of the peoples’ representatives in their Houses of Parliament, while international relation policies are the responsibilities of their Executive Governments headed by the Presidents or the Prime Ministers.

For Pelosi to take on the role of the President of the great United States, this is an embarrassment to President Biden and the Democratic Party.

It appears now to the other leaders of the World that the most powerful Democracy in the World, the United States, is led by a very weak President.

The United Nations has by Resolution, supported the One China Policy.

The Pacific and the World do not need another Putin style blunder which is now creating havoc worldwide.

The Taiwan visit gives all of us a good lesson to remain peaceful and vigilant against what their blind and power-hungry Speakers of their Parliaments can do to their countries.