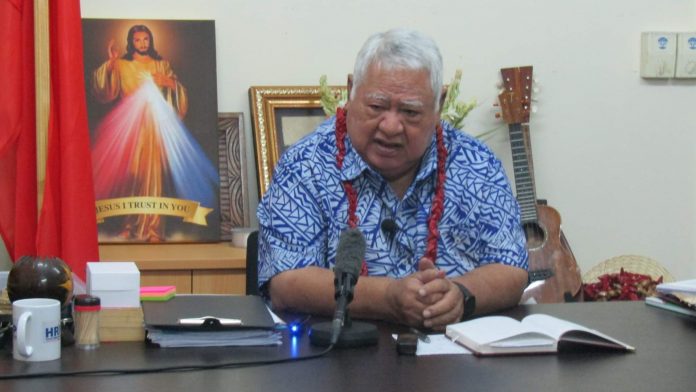 Leader of the Human Rights Protection Party and former Prime Minister of Samoa Tuilaepa Dr Sailele Malielegaoi says there is no Law to stop HRPP elected members from attending Parliament when it convenes on Tuesday morning 14 September 2021.

The Speaker of Samoa’s Parliament, Papalii Lio Oloipola Taeu Masipau issued a notice that prohibits elected members of the Human Rights Protection Party from entering Parliament at its first full sitting in the Maota Fono since the nation went to general elections five months ago.

The Speaker has also closed off Parliament House and the Malae o Tiafau to the public, and the Samoa Police have issued a notice to prohibit any member of the public from entering Parliament grounds.

“Any non-compliance will be dealt with accordingly as per offence of trespass and other possible offences,” states the police notice.

In response Tuilaepa says the HRPP members and their constituencies will be attending Parliament tomorrow.

“We are surprised with the notice issued today, because when we met with the Speaker last week, he did tell us that we’d be sworn in,” said Tuilaepa.

“He also said we’d be given a response later that same day, however, it is now Monday,” said Tuilaepa.

“There is no Law to stop us from attending, and we will be there tomorrow,” said Tuilaepa, “and so will our families and constituencies”.

Tuilaepa said they are surprised with the Speaker’s reason, that HRPP 4had not accepted his position as a sworn in Speaker, when his first letter had actually thanked them for acknowledging his position.

The HRPP leader said it was important for elected MPs to be sworn in before Parliament can consider the Court report with results of by-elections.

Tuilaepa said they have heard that police are being told to stop the public, however there are not less than 100 000 members of HRPP expected tomorrow.

“I have advised the Police to stand for the Law… because the people should not be stopped from attending.. but there will be not less than 100,000 of us”.

According to Tuilaepa there will be no quorum for Parliament if they do not attend, adding that the Appropriation Bill would probably be passed on the same day without a Parliamentary debate.

Tuilaepa said he is sad about where Samoa is at, and  current state of Samoa’s political crisis is becoming a joke and an embarrassment.

“We are becoming a laughing stock.. Everything is upside down and inside out,” he said.

Asked what they intend to do if there is a stand off, Samoa’s longest serving Parliamentarian said they are going in peace and their approach is one of humility.