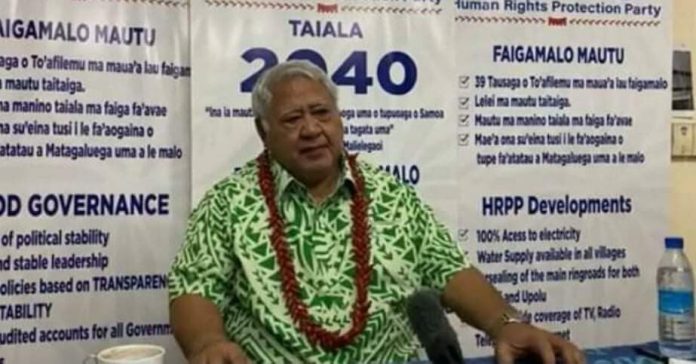 Caretaker Prime Minister Tuilaepa Dr Sailele Malielegaoi says he was taken by surprise by the Head of State’s decision to call fresh elections for Samoa.

In another twist to Samoa’s general election saga, Head of State His Highness Tuimalealiifano Vaaletoa Sualauvi II announced that he has revoked all Warrants of Appointments pertaining to the 9th April 2021 General Elections, saying he has directed the Office of the Electoral Commissioner to conduct new elections for Samoa to be held in two weeks time, on Friday 21st May 2021.

“The uncertainty regarding the results of the elections has affected every fabric of our society..

“Today, by Writ, I directed the Office of the Electoral Commission to issue a Public Notice of the Writ for Election of Members of Parliament for all Constituencies and have appointed Friday 21st May 2021 as the day of Election..

“In doing so, I hereby revoke the Warrants of Appointments issued on the 12th March, 16th April and 20th April 2021 in relation to the General Election held on the 9th of April 2021”

“I, too, did not know where the Head of State’s final decision lay.. and when I heard Fiame’s live at 5pm, I tried to listen out for what the latest developments were..”

Tuilaepa said that they, too, were keen for the continuation of the matter before the Courts, where the FAST party had challenged the application of Article 44(1A) of the Constitution that brings in an additional woman MP.

The caretaker Prime Minister said that according to their lawyer, the Government’s position is difficult to overthrow, because the intention of the Law, as well as the explanatory memorandum, are clear. He said discussions in Parliament when Article 44 was passed, are also clear.