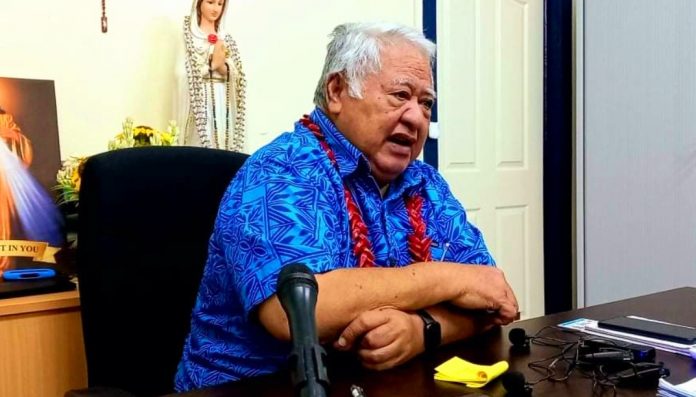 Opposition Leader Tuilaepa Dr Sailele Malielegaoi is concerned that the establishment of development committees for the seven districts returning to the polls for by-elections in November, may influence voters.

In an interview with Samoa Global News, the former Prime Minister said the development committees for the seven districts preparing for by-elections should only be formed once the elected Member of Parliament is in place.

“The formation of these district committees that discuss how the allocated funds should be spent, needs to be put on hold until after the by-elections,” said Tuilaepa.

The leader of the Human Rights Protection Party (HRPP) is referring to a development fund of $1 million tala per year, intended for tailored development projects within the 51 districts of Samoa. The initiative was a campaign promise of the Faatuatua i Le Atua Samoa ua Tasi (FAST) party.

The nine-month budget presented by FAST in September allocated $11 million tala to the project, with an intial $200k tagged for each constituency for scoping and to establish district councils that can lead and implement projects under the initiative.

“Initial work will focus on establishing appropriate governance and operational frameworks to prepare the district councils for implementation of their development plans”, stated Samoa’s Minister of Finance Mulipola Anarosa Ale Molioo in her budget address.

Tuilaepa says the Minister of Women, Community and Social Development (MWCSD) Leota Laki Lamositele Sio had clearly stated in Parliament that district committees would not be discussing the distribution of community development funds, until MPs have been elected.

A representative of the MWCSD Community Division confirmed that work is currently underway to establish district councils across Upolu and Savaii, including the seven districts now preparing for by-elections.

In a press statement issued by HRPP on Friday night, Tuilaepa hits back at the Government saying, “the country is being held ransom in exchange for support at the polls” through the implementation of the community development project.

Tuilaepa referred to a statement made by FAST Chairman Laaulialemalietoa Leuatea Polataivao Schmidt on EFKS TV where Laauli warned the 18 HRPP MPs against publicly mocking the community development initiative, or stand to be left out of the distribution of funds and the implementation of the project.

Tuialepa says what La’auli has labeled as HRPP mocking this FAST initiative, is not true.

He says they are asking why it is $200,000 and not the promised million tālā.

1) Sagaga 2: HRPPs Seiuli Ueligitone Seiuli lost his seat when former HRPP Associate Minister Maualaivao Patelesio Ah Him sued him for bribery. Both politicians are now subject to the 10 year stand down period.

2) Sagaga 4:  HRPPs Tuisa Tuimasealii Tasi Patea won this seat, however, he was forced to resign to avoid an election petition by the FAST candidate against him. Tuisa has been given the green light by the Speaker to run the by-election.

3) Aleipata Itupa i Lalo: HRPPs Fiugalu Eteuati Eteuati lost his seat when a senior member of HRPP, Tafua Maluelue Tafua sued him in Court. Tafua was exonerated of bribery when the counter petition against him was thrown out by the Courts. However he won’t be running the by-election. Instead his brother Faleomavaega Dickie Tafua will bele running for FAST.

4) Falealupo: Leota Aeau Tima Leavai was one of just five women who won at the April 9th general election, but had to resign from her seat as a condition to withdraw the election petition filed by FAST candidate Fuiono Tenina Crichton. Leota Aeau Tima’s brother Tuitogamanaia Dr Peni Junior Leavai will be taking on his sister’s petitioner in the upcoming by-election.

7) Safata 2: Nonu Teo Lomialagi Lose Niumata resigned following a FAST petition filed against him, and will be standing again for his seat in the by-election. It will basically be a rematch against him and his FAST petitioner Laumatiamanu Ringo Purcell.