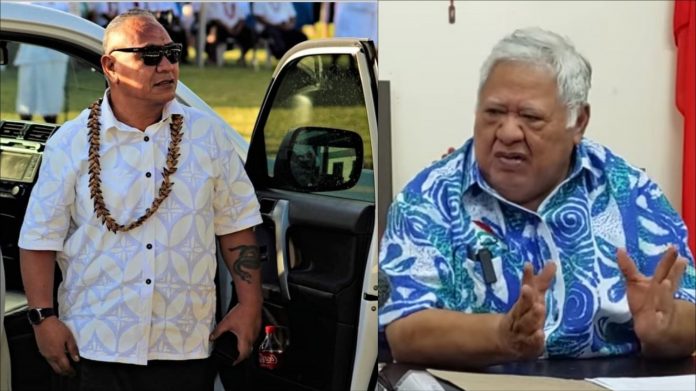 Leader of the opposition, Hon Tuilaepa Sailele Malielegaoi says the defamation claim filed against him by Works Minister, Olo Fiti Vaai will backfire.

Speaking to local media at a press conference following his 2-year suspension from Parliament, Samoa’s former Prime Minister said he is prepared to respond in Court, but feels sorry for Olo because the case will bring up things he may not want revealed.

“It will only backfire and bring shame to his consitutency,” said Tuilaepa who adds that Olo continues to drive in a government-owned vehicle with private license plates.

“The car does not belong to him, it belongs to the government,” repeated Tuilaepa.

Olo Fiti Vaai had last week announced in the media that he would resign if the case was proven against him, and similarly, Tuilaepa should resign if he was found guilty of defamation.

Tuilaepa said the Minister should stop making threats, but go ahead and bring the matter to Court. “He must be nervous about it.”

Samoa’s Minister of Works, Transport and Infrastructure filed a defamation claim under criminal libel laws against Tuilaepa for calling him a thief because he was driving a government vehicle with private license plates, that had been purchased with underspent funds from a NZ-funded project.

Police have said according to their investigations, there is enough evidene to file the claim in Court, and the file has been referred to the Office of the Attorney General as per usual protocol for high profile cases.

Hon Olo Levaopolo Afoa Fiti Vaai made his intentions made public in June, that he would be filing a defamation law suit against the leader of the opposition and former Prime Minister, Hon Tuilaepa Dr Sailele Malielegaoi.

The complaint stems from one of Tuilaepa’s weekly press conferences where the opposition leader raised the issue of a toyota diesel landcruiser fitted with private plates, which had been ordered from Australia for the exclusive use of the Minister.

In response Olo offered a detailed explanation on the EFKS TV’s Soalaupule programme – a church-owned national television station that is has been frequented by Cabinet Ministers on a werkly basis.

The Minister did not deny ordering the landcruiser from Australia and stressed the importance of having the appropriate vehicle, as MWTI Minister, to conduct site visits to all infrastructural developments across the country.

The landcruiser was first proposed to be purchased by the Samoa Airport Authority (SAA) said the Minister, however, approval was given to use $200k tala of underutilised MWTI funds left over from the NZ Government-funded Waterfront project for the Minister’s vehicle.

The Minister goes on to explain on the radio interview that $50,000 tala was then provided by the Samoa Airport Authority, to deposit a landcruiser for his use, to be procured from a company in Australia