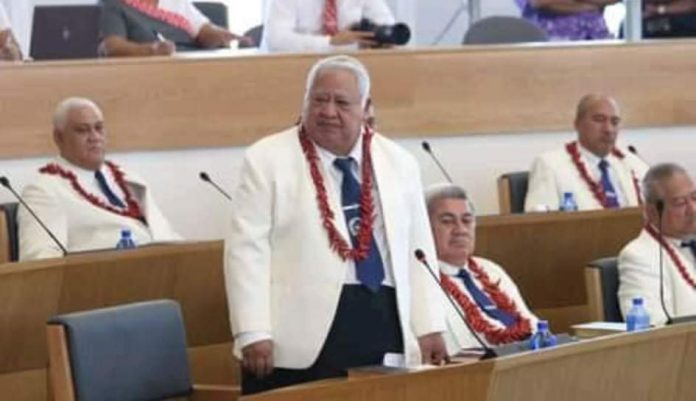 Samoa’s longest serving Prime Minister and Member of Parliament, Hon Tuilaepa Sailele Malielegaoi addressed the Legislative Assembly this morning and for the first time in his 40-year career, stood at the other side of the floor as a leader of an opposition party.

After the swearing-in of 18 elected members of the Human Rights Protection Party (HRPP) the Speaker of the House Papalii Li’o Ta’eu Masipa’u gave the opportunity to Tuilaepa to speak in Parliament as the leader of HRPP, now serving as the opposition party after 40 years of being in power.

The swearing-in ceremony was conducted as a response to a Supreme Court order that the Speaker was obliged to administer the oat of allegiance on HRPP’s elected MPs forthwith.

In his remarks, Tuilaepa acknowledged the Speaker as the Head of Parliament, the third pillar of Samoa’s democratic governance structure. He congratulated Prime Minister Hon Fiame Naomi Mata’afa and her Cabinet for the work done since they took over office just months ago on the 27th of July 2021.

Samoa’s longest serving Prime Minister (1998-2021) spoke about the need to hold parliamentary debates based on frank discussions and courageous conversations. Tuilaepa used Samoan oratory metaphors to say that Parliamentary discussions can grow loud with heated debate, and this should not damage relationships amongst them.

The former Prime Minister spoke about the importance of an MP’s calling as an elected Member of Parliament, chosen by the people of Samoa to represent their voices in the Legislative Assembly.

Tuilaepa touched on the past five months of the post election political crisis, in that Samoa has withstood the test of heightened conflict and has come out stronger because despite the turmoil in recent months, Samoa was still able to maintain peace.

“This is something that the world has witnessed, despite the many months of conflict and dispute we went through as a nation, peace was always maintained and now restored”.

“Why? Because of the strength in our culture and traditions, under the firm leadership of Village Councils (Alii ma Faipule) chosen by God to lead Samoa, as well as the supportive role of the Church and our church ministers”.

“May God continue to pour down his blessings, through different ways and approaches that can benefit the development of Samoa,” said Tuilaepa.

At an HRPP press conference this afternoon Tuilaepa was asked what it felt like to stand on the opposition side of Parliament House, after all these decades of leading the government. The veteran MP said it was a normal day of Parliamentary proceedings for him, and did not feel any different.

Asked how he felt when he greeted the Chairman of Faatuatua i Le Atua ua Tasi (FAST) party Laaulialemalietoa Leuatea Schmidt, who had previously been a Minister of Agriculture in his Cabinet – Tuilaepa, 76, said it was like greetig a son.

The week has ended with an air of reconciliation between the two rival political parties as 18 HRPP elected members were finally sworn-in following a Court order issued late yesterday afternoon.

The Speaker of the House called for today to be remembered as a day of forgiveness, and apologised to the nation for shortcomings as leaders since the April 9th general elections.

Tuilaepa ended his short remarks by saying that this has truly been a day that the Lord has made, and a day that Samoa has been waiting for. A new day for Samoa to move forward despite past differences.

Tuilaepa touched on the Court of Appeal decision that declared the FAST government as having the majority of elected members following the April 9th general election, and therefore the rightful government of Samoa. A decision he and HRPP had openly declared their discontent towards the Judiciary for, however, the former Prime Minister said that despite the differences in opinion, their support of the Court decision was evident by their moving away, to allow for the new Government to take over.

Parliament will resume on Monday morning, with many still to give their maiden speeches as newly elected MPs.