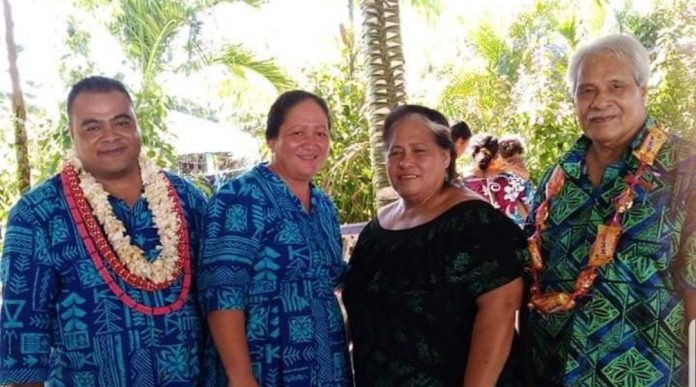 It was a day of sharing, to acknowledge achievements past and to encourage endeavours of the future, as the Tufulele Catholic Church bid farewel to their Catechist for six years – Reverend Toetu Paletasala and wife Akenese.

In the priest’s absence, the parish catechist takes on the role of being the main teacher of the faith in that parish.

It is the usual practice for the Diocese of Samoa Apia, that after six years of serving a parish that Catechist has to move.on and continue to serve God in a new parish.

Catechist Toetu and his wife Akenese acknowledged Tufulele Catholic Church for the love and support shown as they served them for the past six years.

As is customary for farewells in Samoa tradition the Catechist sought the parish’s forgiveness for  any wrongdoing or grievance they may have caused.

“If there were times that we’ve made mistakes performing our pastoral duties, please forgive us,” he said.

Mrs Paletasala was in tears, as she spoke to acknowledge the Women’s Committee of Tufulele Catholic. She spoke affectionately about her time and lessons learnt with them.

The women’s cmmittee conducted the traditional  aiava (gifting) for Reverand Toetu and his family with food, clothing and fine mats and a monetary gift.

There were further gifts given personally by individual pariah members who had become close to the church leaders during their time at Tufulele.

Paramount Chief Luatuanuu Pili spoke to encourage the outgoing Catechist to be strong in the Lord as they prepare to serve their new parish at Tufutafoe Catholic Church in Savaii.

“We give these gifts to show our appreciation for the love and dedication you gave to us.

“Go with God and serve your new parish with courage and love,” Luatuanuu said.

Tufulele Catholic Church will welcome their new Catechist in February 2021.