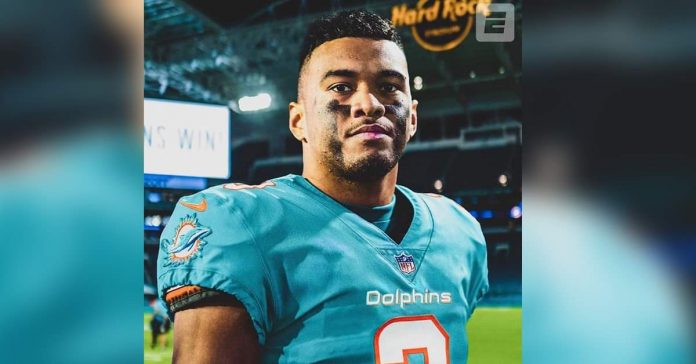 Tua Tagovailoa has been drafted 5th overall by the Miami Dolphins in the 2020 NFL Draft.

Son of Diane and Galu Tagovailoa, the All American becomes the third Samoan quarterback to be drafted in the top five behind Marcus Mariota who was Pick#2 in 2015 and Jack Thompson who was Pick#3 back in 1978.

The 22 year-old quarter-back of Samoan descent was born and bred in ‘Ewa Beach, Hawaii before moving with his family to Alabaster, Alabama.

Tagovailoa played quarter-back for Alabama University for three seasons before today’s draft by the Miami Dolphins.

The quarter-back gene runs in the Tagovailoa family as Tua’s younger brother Taulia plays as Tua’s back up at the University of Alabama.

Tagovailoa shares his best attributes on a live interview with the National Football League, a few days ago.

Tua says he’s bringing with him his competitiveness, humility and class into the NFL

“The NFL is getting someone who is very competitive, someone who just goes out there and does what he has to do to help his team become successful, but someone who also carries himself with humility and class,” he says.

There were concerns that Tagovailoa would fall to later rounds of the draft due to a hip injury sustained against Mississippi State University during the 2019-2020 College Football Season.

Tagovailoa underwent surgery two days later at Birmingham Hospital. The injury ruled him out of the NFL Combine which is an invite only event of the worlds best college football players on display for NFL Scouts.

Prior to this injury, scouts had predicted Tua Tagovailua for the number 1 overall pick of the NFL Draft.

Tua Tagovailoa was a quarter-back for the University of Alabama for three years but was only a starter after his freshman year.

In an interview with SB Nation in 2016, Tagovailoa stated that his committment to Alabama University was greatly influenced by his Christian beliefs.

Tagovailoa has accomplished many feats in his tenure at Alabama. In the 2017-2018 season, he was named Offensive MVP in the National Championship game as he rescued Alabama from a 13-0 deficit at halftime to win 26-23 in overtime.

This season, Tua was the recipient of the Maxwell and Walter Camp Awards, and became an All American.  He was also runner up for the 2018 Heisman Trophy – awarded to the best College Football  Player of the Year.