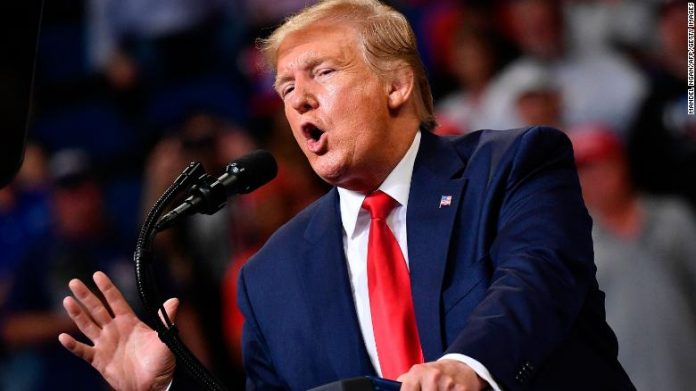 27 June, 2019. (CNN)Analysis by James Griffiths, CNN. United States President Donald Trump has found the one immigration policy more controversial than his own, and endorsed it.

Amid heightened media scrutiny over the tragic fate of a father and daughter who died on the US-Mexico border, Trump tweeted pictures of four fliers distributed by the Australian government warning migrants away from attempting to come to the country, adding that “much can be learned!”

That policy, with slogans such as “NO WAY, you will not make Australia home,” was the brainchild of current Prime Minister Scott Morrison, who Trump is meeting with Thursday ahead of this week’s G20 summit in Osaka, Japan.

These flyers depict Australia’s policy on Illegal Immigration. Much can be learned! pic.twitter.com/QgGU0gyjRS

As immigration and border protection minister, Morrison in 2013 oversaw the “Sovereign Borders” policy aimed at preventing people smuggling and asylum seekers deaths at sea. While that policy was successful in lowering the number of people arriving in Australia, it achieved this in part by massively expanding the number of people held in offshore detention camps on the Pacific nations of Nauru and Papua New Guinea.

While that policy has become more or less bipartisan consensus in Australia, Morrison has become synonymous with tough immigration policies, often appearing on TV endorsing the campaign slogan “Stop the boats.”

Following Morrison’s surprise win in May’s general election, at least nine people attempted to take their own lives in a camp on Papua New Guinea’s Manus Island, where around 500 people are still held in detention.

The opposition Labor Party had said it would resettle at least 150 refugees in New Zealand, which has repeatedly offered to take them but been turned down by the Australian government, which claims doing so would encourage more migrants to attempt the risky sea crossing in the Pacific.

The incidents on Manus were only the beginning of a wave of attempted suicides and cases of self-harm on the island. This month at least eight other men followed suit, including a Sudanese man who set himself on fire and an Iranian who attempted to hang himself but was cut down by guards, according to witnesses.

In 2016, a 23-year-old Iranian man died after setting himself on fire in a detention camp on Nauru. Following his death, another refugee, 21-year-old Somali woman Hodan Yasin, self immolated and was evacuated to Australia for emergency medical treatment which saved her life.

“The situation of their indefinite and prolonged confinement, exacerbated by the lack of appropriate medical care amounts to cruel, inhuman and degrading treatment according to international standards,” the UN rights experts said in the statement.

Even if found to be refugees, asylum seekers are not permitted to settle in Australia and must either go home, hope for relocation to a third country, or remain in Papua New Guinea or the remote island of Nauru. Some have been sent to the US under deal struck by Morrison and Trump’s predecessors, Malcolm Turnbull and Barack Obama.

That deal — under which around 530 refugees have been settled in the US — was strongly criticized by Trump and caused an awkward first phone call between him and the previous Prime Minister Malcolm Turnbull.

“I am the world’s greatest person that does not want to let people into the country,” Trump said in the call, complaining that Australia was foisting migrants on the US.

While that particular element of Australia’s immigration policy may have frustrated the US leader, he will find much in common with Morrison when they meet on Thursday for dinner.

The meeting with a fellow anti-immigration hardliner will likely come as a relief as Trump faces increasing criticism at home for his tough border policies.

For the hundreds of people in detention camps on the US border, however, the idea that Trump is learning from Australia’s policy will inspire anything but relief.

Admin - October 6, 2021
Digicel have partnered with Coca-Cola for a Fantastic MyCash White Sunday promotion. All customers using MyCash services will get a free 330ml can of Coca-Cola...

“You Are My Hero Too, Mana”