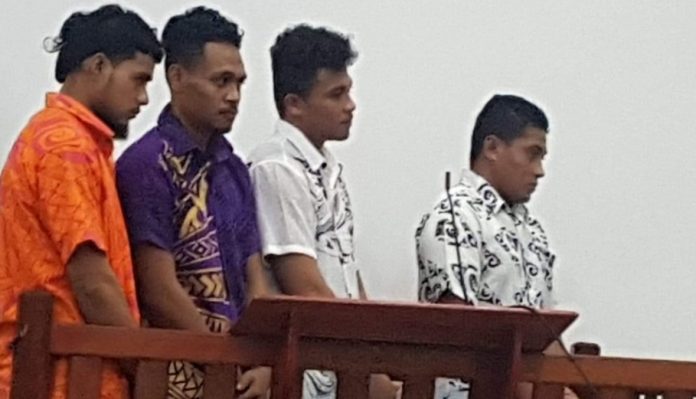 The trial of four men who caused the death of a father of six from Samalaeulu, Savaii began before Justice Tafaoimalo Leilani Tuala Warren today.

In September 2019, the man from the same village as the four accused  died of serious injuries, allegedly beaten to death by the defendants.

The Police Superintendent in Savaii had told Samoa Global News at the time that the deceased man was driving past when the four accused allegedly stoned his car.

“As the victim was exiting the car, a rock struck his head and they continued to beat him while he was unconscious on the ground”.

The motive was unclear but alcohol was confirmed at the time to have been involved.

“Alcohol was a major factor in this matter as the four men were under the influence of alcohol, and so was the deceased”, said the Superintendent.

All four men pleaded not guilty to the charge of murder in October last year.

This morning, however, prosecution withdrew the murder charges and proceeded with the lesser charge of manslaughter, to which all four men have entered not guilty pleas.

The defendants are also charged with being armed with a dangerous weapon and throwing stones.

Justice Tuala-Warren heard opening submissions today and then adjourned the matter so the Court can first deal with legal issues from defense counsels, and for the prosecution’s Investigating Officer (IO) to arrive from Savaii.

There are more than 20 on the witness list, and the trial is expected to continue into next week.

Paulo Mika is in police custody while the other three defendants are on bail.