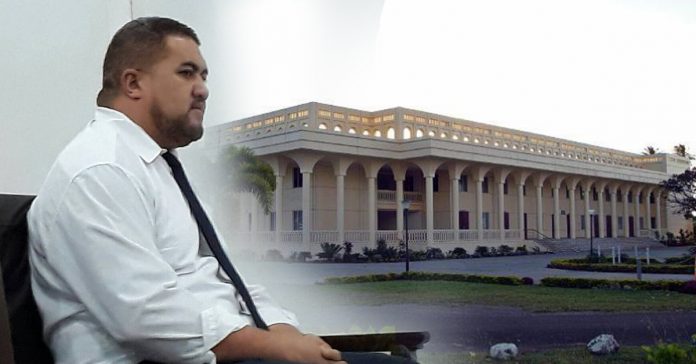 15 May 2019, Apia Samoa. The assessor trial of commercial farmer Peter Tulaga accused of shooting a woman in the face began yesterday before Justice Leilani Tuala-Warren.

Tulaga is facing charges of attempted murder, armed with a dangerous weapon, possession of an unregistered firearm and one alternative charge of causing grievous bodily harm with intent.

The older brother of the accused, Reverend Petelo Tulaga took the stand and testified that he had carried the victim out of a bedroom on the day of the incident.

The faifeau told the Court that around 5pm on the day of the incident he heard a loud bang coming from his mother’s home which is about 100 metres away from his own.

Reverand Petelo said that he was at his home watching television when he heard a loud bang similar to the sound from a spray can when it is thrown into fire.

Rev. Petelo went on to say that not long after he heard this noise his nephew came running to his house and told him that there’s an argument at his mother’s home.

The witness told the Court that he then walked over to his mother’s house to see what was happening.

When he got to his mother’s house he saw the defendant (Peter Tulaga) talking to his sister Melania.

He said he when he got to where his siblings were, the defendant told him that he was leaving.

Reverend Petelo told the Court when the defendant left he heard a voice coming from inside his mother’s house that sounded like someone was in distress.

He added that he then instructed his sister Melania and his brother Paulo Tulaga to go and bring out the person.

He said the two went inside but they could not bring the victim out so Reverand Petelo went into the room where the victim was.

He said that he carried the victim out of the room but it was a scene that he would never forget.

He told the Court that the lower part of the victim’s face had been removed and her teeth lay on his arm as he carried her out of the room.

“My whole body felt the shock of what was before me.”

The witness said that he then instructed his sister Melania and her husband to take the victim to the hospital.

Tulaga is represented by Lefau Harry Schuster while Leone Su’a-Mailo and Ann Matalasi appeared for prosecution.

The victim is still under medical care in New Zealand and the Court registrar confirms that she and medical doctors are due to give evidence via video link later in the week.

The trial has been scheduled for four days, and continues before Justice Tafaoimalo Leilani Tuala-Warren.