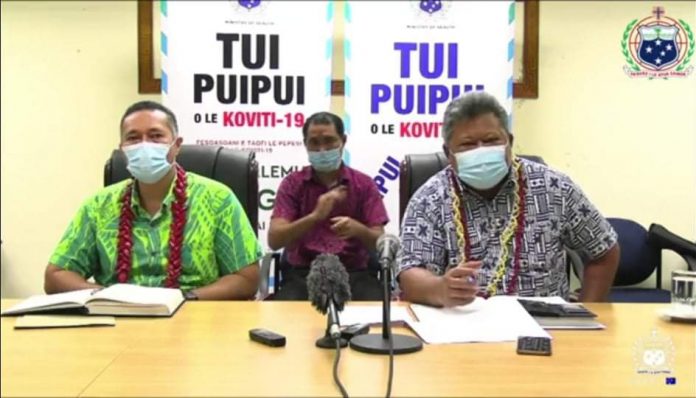 A 24 year old male who travelled to Samoa from Hawaii via the repatriation flight that arrived on Thursday 9th December from Nadi, Fiji has tested positive for Covid-19.

The information was conveyed to Samoa through a National Emergency Operations Centre (NEOC) press conference with the media on Monday afternoon.

“As per Samoa’s border control protocols, all repatriated passengers who arrive into Samoa are tested at the airport, and then again on Day 3,” said Leausa. “All passengers are tested between 5 to 7 times before they are released from quarantine,” he added.

Leausa says the passenger is asymptomatic and has been taken from a hotel in Apia where he was quarantined with others, to an isolation facility at the Motootua National Hospital.

Leausa confirmed the passenger was fully vaccinated and met all pre-departure requirements before arriving into Apia. He also tested negative at the airport, along with all other arrivals from the same flight.

No other positive cases were reported amongst the 134 passengers who arrived on Thursday 9th December 2021. According to Dr Naseri, the flight included 30 passengers who travelled other destinations, and connected via Nadi.

“Some were from the mainland USA, Hawaii, Italy, and one from Israel,” said Leausa. “These passengers all connected to Fiji, and travelled from Nadi with scholarship students and others.

“The traveler who did test positive travelled from Hawaii to LA and then to Fiji,” said the Director General of Health.

Dr Naseri added that the 24 year old has been further tested in isolation, and shows no symptoms whatsoever.

The Director General says those who sat near the positive case on the flight are all being tested and carefully monitored.

Leausa Dr Naseri allayed rumours that an elderly woman has been tested positive. “That is not true, she was taken in for monitoring of a heart problem, and is now back in quarantine”.

NEOC Chairman Agafili Shem Leo spoke to remind all passengers expecting to travel to Samoa of the strict border controls and pre-departure requirements.

“We have found this case early on in the 21-day quarantine period,” said Agafili.

The NEOC Chair also reminded the public the case is not a community case and there is no need to panic.

“We are confident with the protocols in place, and this is the reason for our strict processes, and the 21-day isolation. There are still 18 more days for these passengers to be monitored in isolation”.

Agafili also called on all quarantine site owners, to please ensure passengers abide by the strict rules in place.

Agafili confirmed there is one more repatriation flight with close to 300 passengers expected to arrive into Samoa from Auckland this Saturday 18th December 2021.