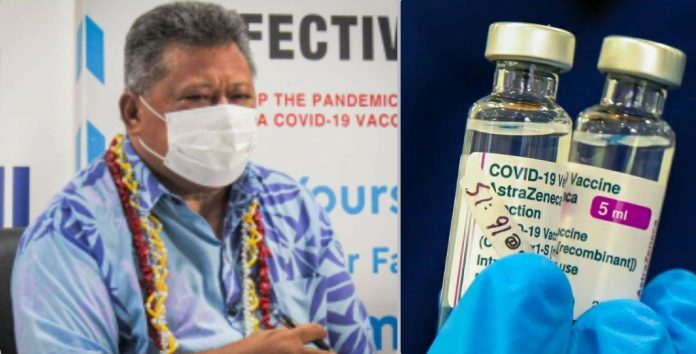 The Ministry of Health Director General, Leausa Dr Take Naseri during an NEOC Press Conference on Monday afternoon warned the general public about misinforming officials about the status of their vaccinations, or using fake names to skip the proper process.

The warning came after Leausa revealed that someone from Apia who had travelled to American Samoa to take up a work opportunity in one of the canneries in Pago, was sent back to Apia. The person had in fact received both doses, however, his first shot was in June and his second shot was in July – a period of 4 weeks.

The World Health Organization (WHO) Trusted Source recommends a gap of 8–12 weeks between the first and second doses of the AstraZeneca vaccine, and Dr Leausa says the individual involved had fraudulently received the second dose, in order to travel.

“For AstraZeneca to offer optimal protection, there needs to be at least eight weeks between the first and second dose, not four weeks,” said Samoa’s Health Director.

“The health authorities in Pago found that this person had faked his second dose, and was sent back home. Please stop using different names in order to get that second dose quickly, it is illegal,” stressed Leausa.

On a more positive note, the Director General of Health revealed plans to receive the Pfizer vaccine for children between 12 and 17 years old. This will extend Samoa’s current eligible target of 130,000 from 18 years of age, to include children from 12 years old.

Leausa reminded the general public especially those who haven’t yet gone in for their second doses, to please do so because each dose does have an expiry date.

As of Augst 23rd, over 88,000 people have had their first dose, which is 72% of Samoa’s eligible population, while over 38,000 or 32% have received their second dose and deemed fully vaccinated.

Samoa continues to have vaccines made available with assistance from its development partners in the region, and remains covid-free with no community transmissions since the global pandemic broke out over 18 months ago.  The only registered case for Samoa was an isolated case discovered and fully recovered while in quarantine.