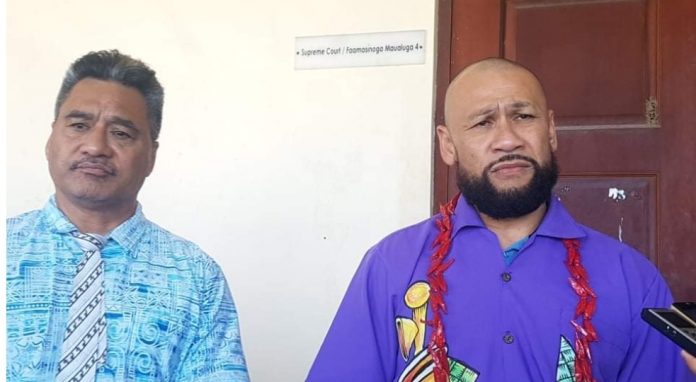 23 July, 2020, Mulinuu, Supreme Court. The two men accused of conspiracy to assassinate Prime Minister  Tuilaepa Sailele Malielegaoi have been denied an application to travel to Australia.

The decision was delivered yesterday morning by Justice Vui Clarence Nelson who assessed both Malele Paulo and Lemai Faioso Sione as being at high risk for not returning in time for their scheduled hearing in November.

“No surety bond whether in cash form or otherwise overcomes the risks that are apparent and inherent in allowing the defendants at this point in time to travel to Australia..”

In his written decision Justice Vui reminded the defendants that the set trial date was now just three months away.

Justice Vui also referred to the the situation in Melbourne Victoria now impacted by another surge of coronavirus cases.

“It is also relevant that at this time Melbourne and the State of Victoria is in lockdown due to the increasing numbers of coronavirus cases, and the fact is that airports and ports are closed and according to the Victoria State Government Website their State of Emmergency is extending to August 2020;

“So even if permissions were given the defendant would be barred from travelling and it is better if they stay in Covid-free Samoa because people run away from risks not towards it”.

Lema’i had applied to be with his daughter while she waits to give birth, and also to undergo medical checks in Australia.

King Faipopo has not seen his family since he arrived in February 2019 to attend his mother’s funeral, and was first arrested by police for publicly accusing the Samoa Prime Minister of  theft, murder and smuggling illegal firearms. to visit his family, especially his children.

Opposing the application, Prosecutor Magele Leone Su’a had told the Court last week that both defendants are Australian residents with no motivation to return once overseas, adding that Lemai planned to travel with his wife and children.

Malele Paulo and Lemai Faioso were released on strict bail conditions by Justice Tafaoimalo Leilani Tuala-Warren in February this year, after six months of being remanded in custody.

It is alleged that between the 30th of April and 12th of August 2019 the two men conspired with others to murder the Prime Minister of Samoa.