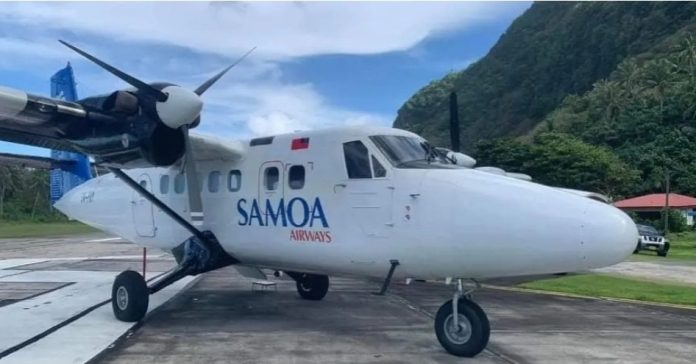 The inter-island flights between Samoa and American Samoa has been reinstated by Cabinet, beginning last Saturday 30 October.

“We have looked at the situation and the status that American Samoa is at, and we’ve seen that it is safe to bring back inter-island travels,” she said.

American Samoa stringent regulations and response, recently vaporized the Covid19 scare that led to the travels between the two sister islands temporarily placed on the back burner.

On Friday the Prime Minister applauded American Samoan Government’s responsive measures in place to protect the residents of the territory which has eventually led to reopening flights following negotiations between health authorities from Moto’otua and Fagaalu in American Samoa.

“One of the main reasons why our inter-island travels is so important, is the partnership between Samoa and American Samoa in terms of medical support,” she said.

“And to add to that, some of our people have secured job opportunities to work in one of the fish factories in American Samoa, and that has proven the importance of our inter-island travels,” she said.

Thursdays and Saturdays are the two days of every week that have been allocated for the flights to be carried out.

“Our partnership with American Samoa is very important to us, not only in the health sector, the business trades and also employment opportunities,” she said.

The Prime Minister noted that local residents needing CT scan available at the Fagaalu Tropical Medical Center in the territory since the CT Scan at Moto’otua is down and awaiting repairs is another issue which Cabinet took under consideration.

“New Zealand has changed their requirements for incoming visitors, and they have now announced that our RSE workers coming into New Zealand would no longer need to be in quarantine upon arrival,” said the Prime Minister.

To add on to that, people living in Samoa that have citizenship in New Zealand have now been given the green light to travel back to New Zealand.

As for Samoa, Cabinet continues to monitor Samoa’s status with the advice of NEOC and the Ministry of Health as the vaccinations campaign roll out.

And for the record, the mandate for all new arrivals to undergo quarantine is still in effect.