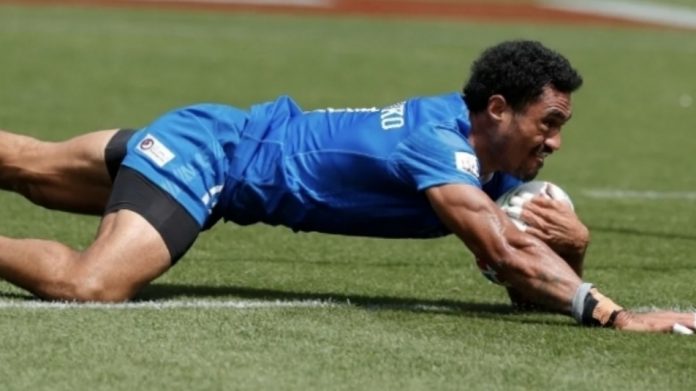 Manu Samoa 7’s have bowed out of Cup contentions in the Toulouse 7’s after a 28-7 semifinal defeat to an on-form Fijian outfit.

Fiji were at their absolute best starving Samoa of possession and playing with vintage Fijian flare. They wasted no time putting points on the scoreboard with a couple of fancy offloads that saw Tevita Dagunu streak away for a 7-0 Fijian lead.

Samoa managed to hold on to the ball for a small period of time and the young Manu side once again looked dangerous with ball in hand.

The ball went from one side of the field to the other and the phases started to build in Manu Samoa fashion.

The Fijian defence then cracked open for Va’a Apelu Maliko to cross over for what would have been Samoa’s first try. In attempting to score closer to the post, Apelu Maliko was pushed from behind by a Fijian player – which forced him to lose control of the ball. A lesson the youngster will no doubt be reflecting on for the rest of the week.

In classic Fijian style, they took the Samoan error and turned it into points. Stuck on their own try line, Fiji sliced down the middle of two Samoan defenders before another offload gave Pilipo Bukayaro a clear 60-meter run to give Fiji a 14-0 lead at halftime.

Whatever words were spoken in the Manu’s halftime huddle worked, because Samoa came back looking like the blue outfit fans have been watching all weekend.

The Manu took the kickoff and held on to possession, showing snippets of the patience and composure that got them to the semis.

Good carries by Neueli Leitufia and Melani Matavao cracked the Fijian defence once again. Fiji committed too many players to one side of the field and Samoa capitalised by putting Owen Niue over for their first try of the match. At 14-7 Samoa were well and truly back in the game.

But Niue’s try seemed to have awoken the more experienced Flying Fijians, and they went straight back to depriving the Manu of the ball.

Samoa also made error after error, and the young Manu Samoa 7s side learnt first hand, that Fiji absolutely punishes teams who gift them the ball.

The Singapore Champions piled on two more tries and put Samoa away to earn themselves a Cup Final match-up against Ireland.

Samoa will now face host nation France at 4:30am Samoa time for the 3rd place playoff.

This is Samoa’s second 3rd place playoff match in just their third tournament back from playing no HSBC competitions in over 2 years.