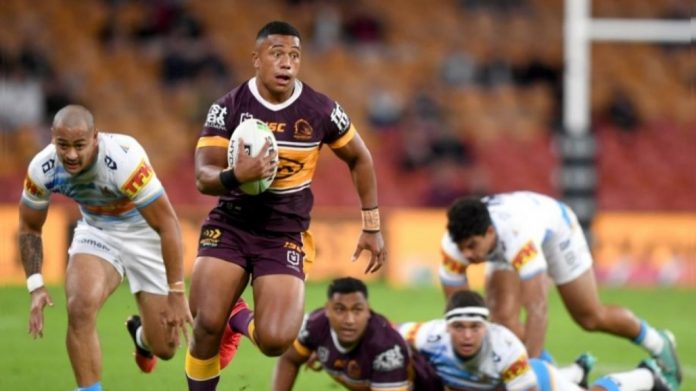 Fanitesi Niu has been granted an early release by the Broncos, to take up a one-year contract with the NRL’s 17th and newest club, the Dolphins.

The Tongan fullback/centre has featured on 32 occasions in the top grade for Brisbane since making his debut back in 2020, scoring 11 tries and covering multiple positions in the backline.

“Niu is a skilful player with great footwork and has the ability to play both centre or fullback,” said Dolphins Head Coach, the legendary Wayne Bennett.

Dolphins’ Chief Executive Terry Reader said Niu would be a strong addition to the clubs’ outside backs ranks.

“We obviously know Tesi very well as he is a Brisbane-born player we have watched come through the grades and become an NRL regular and an international,” Reader said.

“We now have a strong list of outside backs with players such as Hamiso Tabuai-Fidow, Euan Aitken, Brenko Lee, Edrick Lee, Jamayne Isaako, Oliver Gildart and Robert Jennings all part of the Dolphins’ foundation squad.

“This group will compete for spots in that first Dolphins’ team to play the Roosters – and with the trials only four weeks away, that competition will start very soon,” adds the CEO.

The newest NRL addition was launched as a bid for inclusion into the NRL by Queensland Cup side Redcliffe Dolphins in 2020. They will be based in the Redcliffe Peninsula area of the Moreton Bay Region.

The Dolphins were granted a separate licence in October 2021 to compete as the national league’s 17th side from the 2023 season onwards.

It is the fourth NRL team in the state of Queensland, and the second in the capital city of Brisbane, alongside the Brisbane Broncos. The Dolphins are the first team to join the NRL competition since the Gold Coast Titans joined in 2007.