06 September 2019. Tonga’s emergence as an international powerhouse in Rugby League may be short-lived as players call for the resignation of Tonga National Rugby League (TNRL) Chairman George Koloamatangi and Board Secretary William Edwards.

Andrew Fifita, Jason Taumalolo, Adam Fonua-Blake and others have publicly threatened to boycott the World 9s and the two scheduled end of year test matches against Great Britain and Australia if Coach Woolf is not reinstated.

The dispute arose following an email sent by TNRL Chair George Koloamatangi to Kristian Woolf advising of his removal as the Mate Maa Tonga Head Coach. 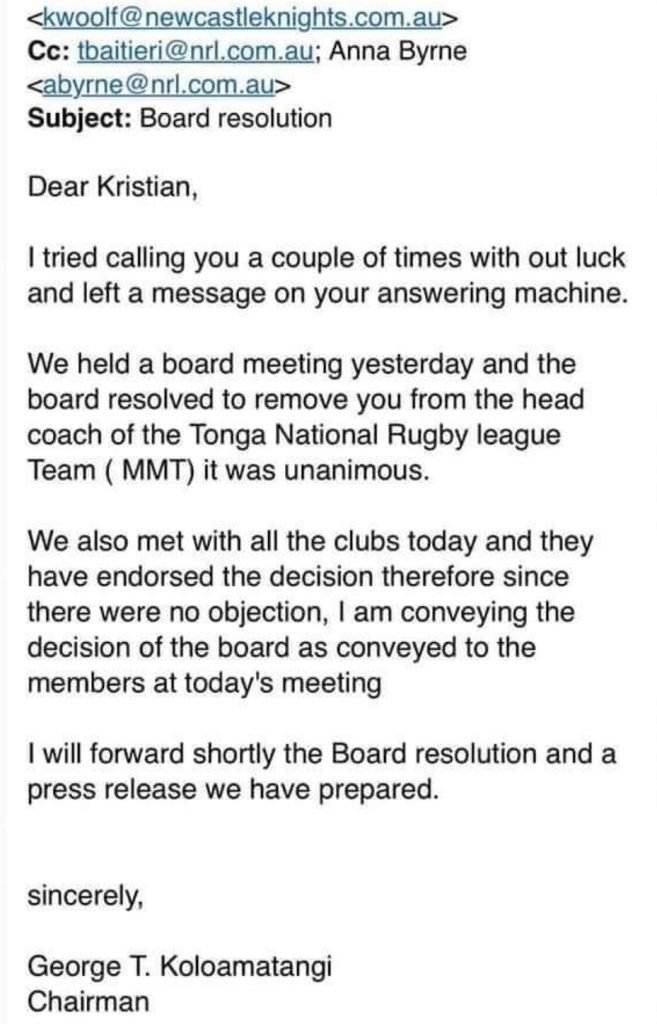 The issue has sent a public outcry of messages across social media in response to a call from players to “help bring our coaching staff back”.

Woolf helped convince Jason Taumalolo and Andrew Fifita to choose Tonga over New Zealand and Australia preceding the 2017 World Cup. A move which led more players to join MMT, forming a dream team of internationally acclaimed professional players who captured the hearts of fans, turning stadiums into a sea of red at every Tongan match.

Andrew Fifita has posted on his instagram, “As players we will not take part in the World 9s and the 2 test matches at the end of year. Our terms are easy, get rid of these 2 men and we will play or Players will walk from the team and bring an end to MMT.”

Players want the interim Tonga National Rugby League board to hold an election and are seeking transparency in decision making.

Former player and team official John Hopoate whose son Will is the MMT captain brought the issue into the light by posting on social media that Woolf had been told to stand down.

Claiming to be the spokesman for the players, Hopoate says letters had been written to the TNRL board in support of Woolf.

“If this interim board think that they can come in and do this after all the hard work we have done to get the players to play for Tonga and to stay loyal to us they have got another thing coming,” Hopoate posted.

“Just finished speaking with the players and they are getting letters done up now. But if this board is still the board during the 9s and the two Tests at the end of the year, and as a spokesman for the players, we will NOT be taking any part in any of the games.

“They are talking about going back to Australia and NZ too,” added Hopoate.

Samoa Global News have contacted Koloamatangi for a comment.

The Downer World 9s is scheduled for Friday 18th and Saturday 19th October 2019 with 12 teams in 3 pools. MMT are seeded in Pool C alongside Pacific rivals Fiji, Samoa and Cook Is.