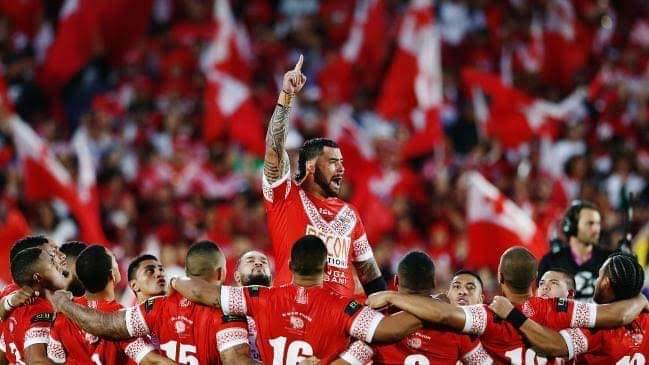 Tonga have defeated Australia 16-12 in a thrilling clash at Eden Park.

It took half an hour for the first points to be scored. After a repeat set Tonga’s veteran fullback Will Hopoate darted out of dummy half and sliced four Australian defenders to score under the post.

This sent the red sea of Mate Ma’a Tongan fans crazy, giving their players a huge boost of momentum.

Being 6-0 down Australia responded like world champs and punched in two quick tries through Paul Vaughn and Jack Wighton.

Australia then led 12-6 at halftime.

It only took 5 minutes for a score board change in the second half.  William Hopoate contributed again by putting Michael Jennings over for a try with a br skip pass.

Now down 10-12, the Tongan fans started to sing. The beautiful sound of the Pacific filled Auckland’s Eden Park. It was defeaning for the Kangaroos.  With the crowd well behind them, the Tongan players started to lift.

Tevita Pangai Jr powered his way up the gut of the Kangaroos defence and put Tonga into the lead 16-12.

At this point Eden Park became an amplified loud-speaker, playing Tongan songs as the sea of red grew louder and louder.

With all this momentum behind the Mate Ma’a Tonga players, there was now no stopping them.

In the dying seconds of the game Australia threw everything they had at the Tongan defence but nothing worked.

Eventually Nick Cotric lost the ball 5 metres out from the try line, and an huge Pacific Island roar erupted at Eden Park.

The small island country of  just under 105,000 people in population had beaten the No. 1 rugby league team in the world! 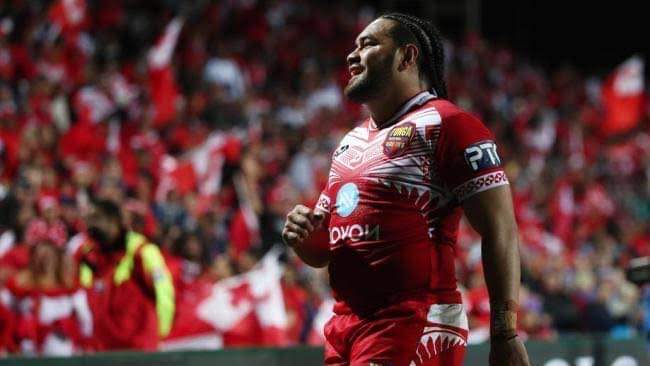 Immediately after the game the sea of red caused traffic jams in and around Auckland city.  Close to 200,000 Pacific Islanders live in Auckland, and the MMT had brought out Pacific Pride with most going to social media to claim Tongan heritage, Tongan relatives or Tongan friends in celebration of the historical win.

At the same time the celebrations pushed a flood of posts through social media from proud Tongan fans all around the globe.

The prize for the biggest smile on an MMT fan goes to Riley Edwin Fonua from Brisbane, cheering for Tonga with his Samoan Mom Robynette Brunt Fonua and his Dad Fleming Fonua. A young fan who could potentially play for Tonga, Samoa or Australia.

Samoan high chief Teleiai Edwin Puni posts from Eden Park to congratulate Tonga for “conquering the world” and reminds us of MMTs wins over Australia, New Zealand and Great Britain in recent years.

“Australia failed to capitalise in the final minute of the game, handing the clash to the proud Tongans who deserved the triumph. Tonight joining Tongans around the world in celebrating a proud historical win,” posts Teleiai.

Auckland based journalist and television presenter John Nicolas Pulu posts from his global travels, “Saturday 2nd of November and we are about to leave Tel Aviv, Israel for Hong Kong and I received the news our Tongan league team #TongaXIII beat the Kangaroos 16-12 🇹🇴🇹🇴🇹🇴 ‘Otua mo Tonga Ko Hoku Tofi’a”.