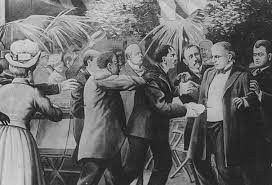 This Day in History: September 6

Republican William McKinley, the 25th president of the United States (1897–1901), was shot this day in 1901 by Leon Czolgosz, an anarchist, at the Pan-American Exposition in Buffalo, New York, and died eight days later.

William McKinley, the 25th president of the United States, was shot on the grounds of the Pan-American Exposition at the Temple of Music in Buffalo, New York, on September 6, 1901, six months into his second term. He was shaking hands with the public when anarchist Leon Czolgosz shot him twice in the abdomen.

McKinley died on September 14 of gangrene caused by the wounds. He was the third American president to be assassinated, following Abraham Lincoln in 1865 and James A. Garfield in 1881.

McKinley enjoyed meeting the public and was reluctant to accept the security available to his office. Secretary to the President George B. Cortelyou feared that an assassination attempt would take place during a visit to the Temple of Music and took it off the schedule twice, but McKinley restored it each time.

Czolgosz had lost his job during the economic Panic of 1893 and turned to anarchism, a political philosophy adhered to by recent assassins of foreign leaders. He regarded McKinley as a symbol of oppression and was convinced that it was his duty as an anarchist to kill him. He was unable to get near the president during an earlier visit, but he shot him twice as McKinley reached to shake his hand in the reception line at the temple. One bullet grazed McKinley; the other entered his abdomen and was never found.

McKinley initially appeared to be recovering, but he took a turn for the worse on September 13 as his wounds became gangrenous, and he died early the next morning; he was succeeded by his vice president, Theodore Roosevelt. Czolgosz was sentenced to death in the electric chair, and Congress passed legislation to officially charge the Secret Service with the responsibility for protecting the president.