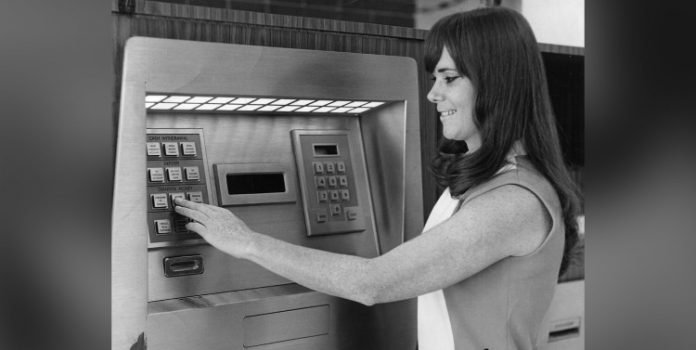 An automated teller machine (ATM) or cash machine (in British English) is an electronic telecommunications device that enables customers of financial institutions to perform financial transactions, such as cash withdrawals, deposits, funds transfers, balance inquiries or account information inquiries, at any time and without the need for direct interaction with bank staff.

ATMs are known by a variety of names, including automatic teller machine (ATM) in the United States[1][2][3] (sometimes redundantly as “ATM machine”). In Canada, the term automated banking machine (ABM) is also used,[4][5] although ATM is also very commonly used in Canada, with many Canadian organizations using ATM over ABM.[6][7][8] In British English, the terms cashpoint, cash machine and hole in the wall are most widely used.[9] Other terms include any time money, cashline, tyme machine, cash dispenser, cash corner, bankomat, or bancomat. Many ATMs have a sign above them indicating the name of the bank or organisation that owns the ATM, and possibly including the networks to which it can connect and/or the word “ATM” or “Cash” (the former being more common in the USA, the latter in the UK). ATMs that are not operated by a financial institution are known as “white-label” ATMs.

Using an ATM, customers can access their bank deposit or credit accounts in order to make a variety of financial transactions, most notably cash withdrawals and balance checking, as well as transferring credit to and from mobile phones. ATMs can also be used to withdraw cash in a foreign country. If the currency being withdrawn from the ATM is different from that in which the bank account is denominated, the money will be converted at the financial institution’s exchange rate.[10] Customers are typically identified by inserting a plastic ATM card (or some other acceptable payment card) into the ATM, with authentication being by the customer entering a personal identification number (PIN), which must match the PIN stored in the chip on the card (if the card is so equipped), or in the issuing financial institution’s database.

According to the ATM Industry Association (ATMIA), as of 2015, there were close to 3.5 million ATMs installed worldwide.[11][12] However, the use of ATMs is gradually declining with the increase in cashless payment systems.[13]