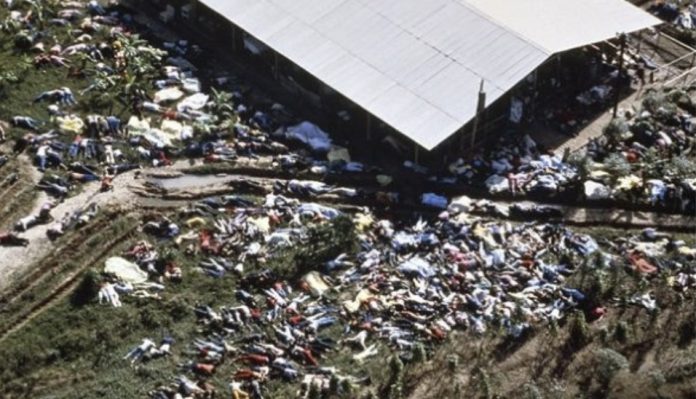 Jim Jones, leader of the Peoples Temple religious community that he formed in the 1950s, and some of his 900 followers died on this day in 1978 in Guyana in a massive act of murder-suicide known as the “Jonestown massacre”.

Jim Jones was a white minister who preached unconventional socialist and progressive ideas to a predominantly African-American congregation, called the Peoples Temple.The church stood out for its multiracial membership, which was quite revolutionary during a time of racial segregation.

At the height of its popularity during the 1970s, the Temple had a membership estimated in the thousands and was courted by local politicians in San Francisco, including Harvey Milk (first openly elected gay official in the history of California).

By 1977, Jones had grown paranoid from the media scrutiny over the Temple’s suspicious activities, so he and his numerous followers moved to an agricultural settlement (a.k.a. Jonestown) in Guyana, the remote country east of Venezuela.

Concern over the welfare of those in the jungle encampment prompted U.S. Congressman Leo Ryan to visit Jonestown in November 1978. After checking out the settlement, Ryan was shot to death along with four other people by Temple gunmen at an airstrip. Following those murders, Jones commanded his followers to drink cyanide-laced punch, starting with the children. There were over 900 who died in Jonestown after drinking poison at the urging of their leader, including Jim Jones, who was found dead of a gunshot to the head. There is speculation that he may have taken his own life, or that his nurse Annie Moore fatally shot him before she killed herself in the same manner.

Tim Reiterman explained in Raven, Jone’s dark qualities –  his need to control people, his deceit, and his anger toward people who betray or abandon him – could be traced to his childhood in Indiana. He performed experiments on animals and conducted funerals for them. “I thought Jimmy was a really weird kid,” Jones’ childhood friend Chuck Wilmore recalled in the 2006 documentary Jonestown: The Life and Death of Peoples Temple. “He was obsessed with religion; he was obsessed with death. A friend of mine told me that he saw Jimmy kill a cat with a knife.” According to Jeff Guinn’s book, The Road to Jonestown.

Decades later, survivors of Jonestown still remember being part of a church/organization that they devoted a good portion of their lives to. “The people were incredible,” says Jean Clancey, who worked on the Temple newspaper. “People who were capable of committing themselves to something outside of their own self-interests.” Adds Laura Johnston Kohl, another former Temple member, “We – all of us – were doing the right things but in the wrong place with the wrong leader.”