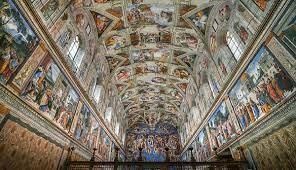 The ceiling of the Sistine Chapel in Rome, one of Italian artist Michelangelo’s finest works, is exhibited to the public for the first time on November 1, 1512. Michelangelo Buonarroti, the greatest of the Italian Renaissance artists, was born in the small village of Caprese in 1475.

Two of the most important scenes on the ceiling are his frescoes of the Creation of Adam and the Fall of Adam and Eve/Expulsion from the Garden. In order to frame the central Old Testament scenes, Michelangelo painted a fictive architectural molding and supporting statues down the length of the chapel.

Michelangelo’s Sistine Chapel art was touched up—and stripped down—in the 1980s and 1990s. Between 1980 and 1999, experts restored selected artwork in the Sistine Chapel, including Michelangelo’s ceiling and his famed fresco known as “The Last Judgment,” which he created in his later years.

Pope Paul IV interpreted Michelangelo’s Last Judgment, painted on the wall of the Sistine Chapel 20 years after completing the ceiling, as defaming the church by suggesting that Jesus and those around him communicated with God directly without need of Church.

Michelangelo’s work on the Sistine Chapel ceiling took four years. He finished in 1512. Of all the scenes painted on the ceiling, the most famous is The Creation of Adam, which depicts the creation story from the Bible.

It’s protected by a copyright law, which means selling those snaps, or even sharing them on social media without permission, could lead to a fine. Meanwhile, photography is off limits at the Sistine Chapel in Italy. The reason? The flashes from cameras can be harmful to the artwork.