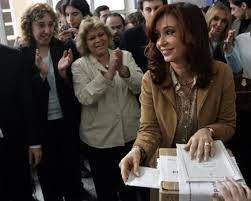 Several major exit polls suggested that first lady Cristina Fernandez de Kirchner won the presidency Sunday by a large enough margin to avoid a runoff. She would be the first woman in Argentina to be elected to the post.

Official results were due later Sunday in the race between the heavily favored Fernandez and 13 rivals. Fernandez’s husband, President Nestor Kirchner, is credited with Argentina’s rebound from a 2001 economic collapse, and much of her support is due to his popularity.

Her closest challengers, former lawmaker Elisa Carrio and former Economy Minister Roberto Lavagna, were trying to force her into a Nov. 25 runoff. She needed 40 percent of the vote, with a lead of more than 10 percent over her nearest rival, to win outright.

Five independent television networks and at least one private radio station reported their exit polling indicated Fernandez has easily won a first-round victory. Three of the television networks released their numbers, giving Fernandez between 42 and 46 percent of the vote, with advantages of between 19 and 23 percentage points over Carrio.

At Fernandez’s campaign headquarters, supporters jumped up and down and embraced one another. 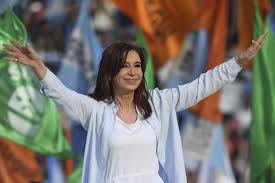 But no opposition candidates conceded defeat, and some said there had been unprecedented fraud. A Lavagna spokesman said the candidate would file a judicial complaint about a “systematic lack of ballots” marked with his name. Candidate Vilma Ripoll denounced “ballot stealing.”

Electoral officials denied any irregularities, but a judge extended voting by an hour in the capital to make up for polling places that opened late.

Was born 19 February 1953), often referred to by her initials CFK, is an Argentine lawyer and politician who is serving as the 37th Vice President of Argentina since 2019. She also previously served as the President of Argentina from 2007 to 2015 and the first lady during the tenure of her husband, Néstor Kirchner. She was the second woman to have held the Argentine presidency, the first directly elected female president, and the first woman re-elected to the office. Ideologically, she identifies herself as a Peronist and a progressive, with her political approach called Kirchnerism.

Néstor Kirchner did not run for reelection. Instead, his wife was the candidate for the Front for Victory alliance, becoming president in the 2007 presidential election. Her first term of office started with a conflict with the agricultural sector, and her proposed taxation system was rejected. After this she nationalised private pension funds, and fired the president of the Central Bank. The price of public services remained subsidised, the country lost its self-supply of energy, and she renationalized energy firm YPF as a result. The country had good relations with other South American nations, and severed relations with the western bloc, a local movement known as pink tide. She also continued her husband’s human rights policies, and had a rocky relationship with the press. Néstor Kirchner died in 2010, and she was later reelected in 2011. She established currency controls during her second term, and the country fell into sovereign default in 2014.

During her two terms as president, several corruption scandals took place and subsequently her government faced several demonstrations against her rule. She was charged for fraudulent low price sales of dollar futures[7] and was indicted for obstructing the investigation into the 1994 AMIA Bombing. In 2017, an arrest warrant was issued for Fernández de Kirchner charging her for treason after further evidence surfaced showing that the pact signed between her government and Iran secretly included the impunity of the Iranians involved in the terrorist attack. Because of her parliamentary immunity, she did not go to prison. In 2018, she was also indicted for corruption on charges alleging that her administration had accepted bribes in exchange for public works contracts. On 30 September 2020, the federal criminal cassation court confirmed the corruption trials of Fernández de Kirchner, ruling the former president’s objections to be inadmissible.