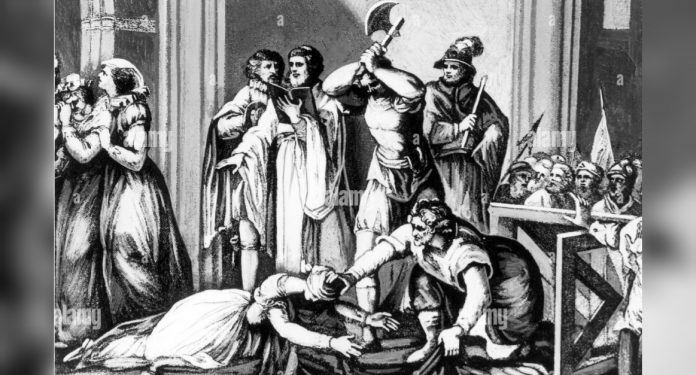 On 8 Feb 1587, Mary, Queen of Scots was beheaded at Fotheringhay Castle in England after she was implicated in a plot to murder her cousin, Queen Elizabeth I.

In 1568, Mary escaped from captivity and raised a substantial army but was defeated and fled to England. Queen Elizabeth initially welcomed Mary but was soon forced to put her friend under house arrest after Mary became the focus of various English Catholic and Spanish plots to overthrow Elizabeth.

Nineteen years later, in 1586, a major plot to murder Elizabeth was reported, and Mary was brought to trial.

She was convicted for complicity and sentenced to death.

Mary Queen of Scots was beheaded for treason. Her son, King James VI of Scotland, calmly accepted his mother’s execution, and upon Queen Elizabeth’s death in 1603 he became king of England, Scotland and Ireland.

Queen Elizabeth I of England and Mary, Queen of Scots were two of the greatest, most legendary rivals in recorded history—although they never even met. In one castle was Elizabeth, the childless “virgin” queen: bawdy, brilliant, tactical and cynical. In the other, Mary: feminine, charming, romantic and reckless.

Mary was Elizabeth’s cousin and an heir to the English throne through her Tudor grandmother, Margaret, Henry VIII’s older sister.

When Elizabeth came to the throne in 1558 she made England Protestant. Consequently she had many Catholic enemies who wanted to see her replaced by Mary Queen of Scots.  The Catholics believed that because Elizabeth had been declared illegitimate in 1536, Mary’s challenge to the throne was stronger than Elizabeth’s.

Mary, Queen of Scots was a threat to Elizabeth’s rule because she had two claims to the English throne: Many people believed Elizabeth to be illegitimate and so felt she had no right to be on the throne.

Mary was a Catholic and many viewed her as their figurehead and a rightful replacement to the throne.