On this day 6th April 1917, the United States formally declared war against Germany and entered the conflict in Europe. Fighting since the summer of 1914, Britain, France, and Russia welcomed news that American troops and supplies would be directed toward the Allied war effort. Under the command of Major General John J. Pershing, over two million U.S. troops served in France during the war. 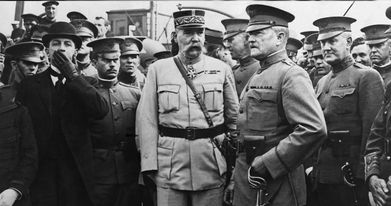 For three years, President Woodrow Wilson strove to maintain American neutrality. Anti-war sentiment ran across the political spectrum. Middle-class reformers such as Jane Addams as well as radicals such as Emma Goldman opposed U.S. involvement in the war.

American participation in World war I permanently transformed the nation. In order to meet increased demands for goods, the federal government expanded dramatically, taking an unprecedented role in guiding the economy.

The war mobilization effort placed tremendous demands on both American military and civilian populations. In a wartime speech, Samuel Gompers, president of the American Federation of Labor, noted that the U.S. work force was fully committed to victory:

“The world war in which we are engaged in is on such a tremendous scale that we must readjust piratically the whole nation’s social and economic structure from a peace to a war basis. It develops upon liberty-loving citizens, and particularly the workers of this country to see to it that the spirit and the methods of democracy are maintained within our own country while we are engaged in a war to establish them in international relations

The workers have a part in this war equal with the soldiers and sailors on the ships and in the trenches…They are demonstrating their appreciation and loyalty by war work, by loaning their savings, and by the supreme sacrifice. Labor will do its part in every demand the war makes. Our republic, the freedom of the world, progress, and civilization hang in the balance. We dare not fail. We will win.”

Active supporters of the war to preserve democracy, women made a step towards political equality when the Nineteenth Amendment enfranchised them shortly after the war. Meanwhile, military service and wartime jobs beckoned African Americans northward. In what is known as the Great Migration, thousands of African Americans left the South and its systems of oppression to face new challenges in Northern cities.