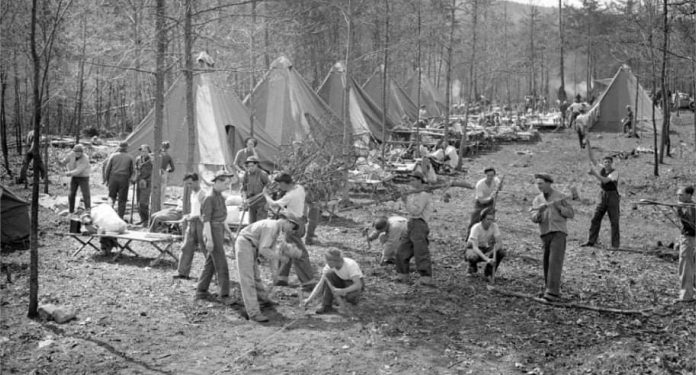 On this day 5th April 1933, President Franklin D. Roosevelt establishes the Civilian Conservation Corps (CCC), an innovative federally funded organization that put tens of thousands of Americans to work during the Great Depression on projects with environmental benefits

In 1932, FDR took America’s political helm during the country’s worst economic crisis, declaring a “government worthy of its name must make a fitting response” to the suffering of the unemployed. He implemented the CCC a little over one month into his presidency as part of his administration’s “New Deal” plan for social and economic progress. The CCC reflected FDR’s deep commitment to environmental conservation. He waxed poetic when lobbying for the its passage, declaring “the forests are the lungs of our land [which] purify our air and give fresh strength to our people.”

The CCC, also known as “Roosevelt’s Tree Army,” was open to unemployed, unmarried U.S. male citizens between the ages of 18 and 26. All recruits had to be healthy and were expected to perform hard physical labor.

Blacks were placed in de-facto segregated camps, although administrators denied the practice of discrimination. Enlistment in the program was for a minimum of 6 months; many re-enlisted after their first term. Participants were paid $30 a month and often given supplemental basic and vocational education while they served. Under the guidance of the Departments of the Interior and Agriculture, CCC employees fought forest fires, planted trees, cleared and maintained access roads, re-seeded grazing lands and implemented soil-erosion controls. They built wildlife refuges, fish-rearing facilities, water storage basins and animal shelters. To encourage citizens to get out and enjoy America’s natural resources, FDR authorized the CCC to build bridges and campground facilities. From 1933 to 1942, the CCC employed over 3 million men.

Of Roosevelt’s many New deal policies, the CCC is considered by many to be one of the most enduring and successful. It provided the model for future state and federal conservation programs. In 1942, Congress discontinued appropriations for the CCC, diverting the desperately needed funds to the effort to win World war II.