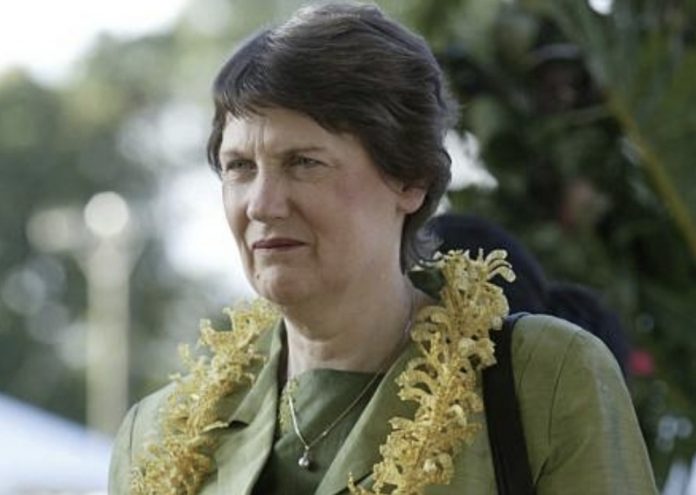 Helen Clark apologised during Samoa’s 40th independence anniversary, over the deaths of 22 percent of Samoa’s population from influenza in 1918 and the 1929 shooting of non violent protestors by New Zealand police.

She described the events as the result of an inept and incompetent administration.

“We come to acknowledge the contribution of independent Samoa to the wider regional and international communities of which we are part. We come to say thank you to Samoa for the gift to New Zealand of its people and for the part they are playing in our society.

“But before coming today I have also been troubled by some unfinished business. There are events in our past which have been little known in New Zealand, although they are well known in Samoa.

“Those events relate to the inept and incompetent early administration of Samoa by New Zealand. In recent weeks as we have been preparing to come to Samoa, there has been a focus on those historic events, and the news has been a revelation to many New Zealanders.

“That focus has come about because my government believes that reconciliation is important in building strong relationships. It is important to us to acknowledge tragic events which caused great pain and sorrow in Samoa.

“In particular we acknowledge with regret the decision taken by the New Zealand authorities in 1918 to allow the ship Talune, carrying passengers with influenza, to dock in Apia. As the flu spread, some twenty two per cent of the Samoan population died. It is judged to be one of the worst epidemics recorded in the world, and was preventable.

“There were also the shootings in Apia in December 1929 of non-violent protestors by New Zealand police. At least nine people died, including Tupua Tamasese Lealofioaana III, and fifty were injured

“The early colonial administration also banished Samoan leaders and stripped some of chiefly titles. These actions split families apart and many families lost their titles forever.

“On behalf of the New Zealand Government, I wish to offer today a formal apology to the people of Samoa for the injustices arising from New Zealand’s administration of Samoa in its earlier years, and to express sorrow and regret for those injustices.

“It is our hope that this apology will enable us to build an even stronger relationship and friendship for the future on the basis of a firmer foundation. New Zealand and Samoa are bound together by our geography, our history, our cultural and family links, and today by our trade and diplomacy. It is important that we are also bound by our mutual respect for each other.”

In response, Samoa gifted the Le Ageagea o Tumua fine mat, which symbolizes “love, death, remorse and forgiveness between kin”. The symbolic end of a difficult chapter was warmly embraced by both governments.

The depth and breadth of NZ-Samoa links extend through church, government, families, sport, education, medicine, culture, film and business, and the two nations share heroes in almost every aspect of society.

Connections between the two countries are enhanced by robust policies relating to immigration and seasonal work. With more than 180,000 Samoans living in New Zealand, remittances contribute significantly to Samoa’s economy.