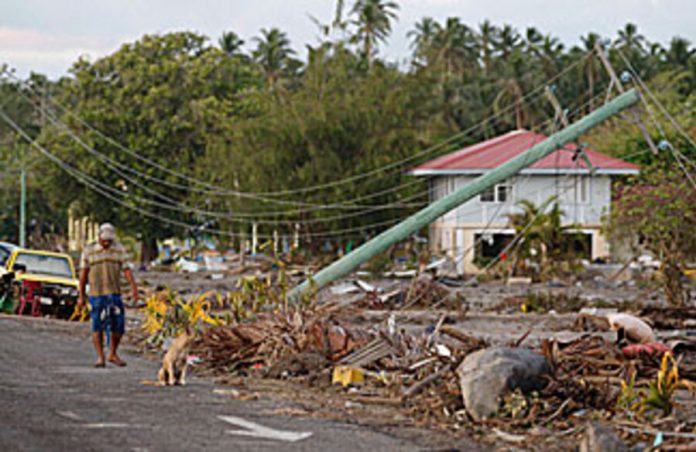 At 6:48am on the 29 September 2009, a powerful 8.0 magnitude earthquake close to the main Samoan Island chain with its epicenter 190 km south of the Samoan capital of Apia. This was followed only 10 – 20 minutes later by two tsunami waves that impacted American Samoa, The Independent State of Samoa, and the small northern island of Niuatoputapu in the Kingdom of Tonga. The highest swell of the water was reportedly 11m and caused unprecedented fatalities, and serious damage, to the affected Pacific Island countries.

The response from the Government of Samoa and the international humanitarian community was immediate, swift and efficient. Affected roads were cleared and recovered rapidly and light vehicles permitted into the areas whilst search and rescue efforts continued. The Samoan Government enacted emergency plans quickly and mobilized the police and other emergency response unities. With support from the Australian and New Zealand military and disaster relief teams the Government provided medical facilities, tents and clean water. Strong social networks responded effectively, despite the devastation, and many homeless were accommodated by family and friends.

There have been 143 reported deaths and a further 5 missing and 310 seriously injured. An estimated 5,274 people about 1 out of 50 Samoans have been affected, mainly on the southern, eastern and southwestern coast of Upolu Island.

The devastation extended beyond human casualties with houses destroyed, cars swept out to sea and some villages being virtually annihilated. With over $200 million dollars in damages, the islands were ravaged both physically and economically