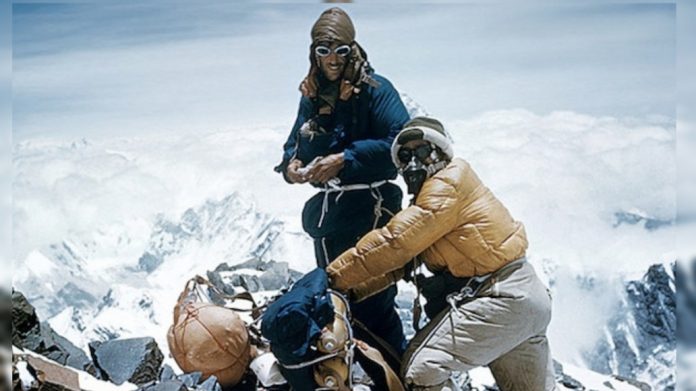 On May 29, 1953, NZ beekeeper Sir Edmund Hillary and a Nepalese sherpa, Tenzing Norgay, set foot atop Mount Everest, the world’s highest mountain. They were the first ever to reach its 29,029-foot peak and today their ascent is considered a great achievement of the 20th century.

After climbing with British teams in the Himalayas in 1951 and 1952, Hillary and another New Zealander, George Lowe, were invited to join John Hunt’s 1953 British Everest Expedition. On 29 May – four days before the coronation of Queen Elizabeth II – Hillary and the experienced Tenzing, reached the 8848-m summit of Mt Everest via the south-east ridge.

From the moment Hillary told Lowe that they had ‘knocked the bastard off’, his life changed forever. Before the expedition had even emerged from the mountains, Queen Elizabeth bestowed a knighthood on the surprised New Zealander. In Britain, he and Tenzing became the subject of media frenzy. They attended formal events and lectured to packed halls.

In 1956–57 Hillary led the New Zealand section of a British trans-Antarctic expedition. Although he was merely tasked with setting up supply depots, he beat expedition leader Vivian Fuchs to the South Pole.

In the 1960s Hillary returned to the Himalayas to help build schools and health facilities for the sherpas of Nepal. In 1978 he led a jet-boat expedition up the Ganges River. Six years later, he became New Zealand’s High Commissioner to India.

Hillary accepted with unfailing grace the responsibilities that his fame brought, including countless media appearances, book signings and requests to write forewords. Aside from his humanitarian work, he also helped mentor a new generation of climbers.

Despite a multitude of honours and accolades, including membership of the Order of New Zealand, honorary citizenship of Nepal, and a portrait on New Zealand’s five-dollar note, Hillary remained humble about his achievements until his death in January 2008, aged 88. He remains one of New Zealand’s most loved national figures.

Hillary: King of the World (NZEdge)