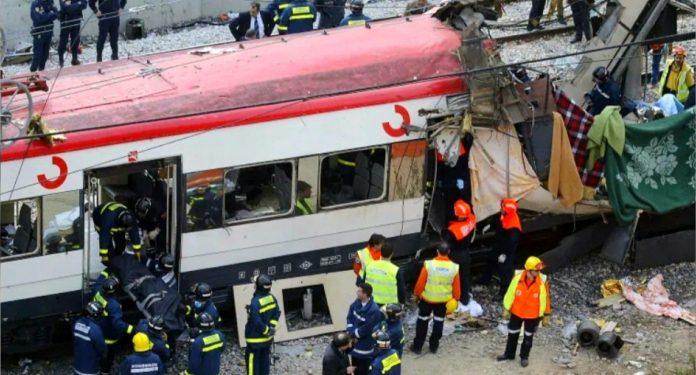 The 2010 Moscow Metro bombings were suicide bombings carried out by two Islamic female terrorists during the morning rush hour of March 29 2010, at two stations of the Moscow Metro  (Lubyanka and Park Kultury), with roughly 40 minutes in between. At least 40 people were killed, and over 100 injured.

Russian officials called the incident “the deadliest and most sophisticated terrorist attack in the Russian capital in six years”, a reference to the Avtozavodskaya and Rizhskaya bombings in 2004. At the time of the attacks, an estimated 500,000 people were commuting through Moscow’s metro system.

The first explosion occurred on the Red Arrow – 75 years train at the Lubyanka station at approximately 7:56 am local time (03:56 UTC). The train started from Yugo- Zapadnaya, and stopped at Lubyanka station. Once the train doors opened, explosives worn by a woman standing at the second carriage’s second exit detonated. The explosive had a force of up to 1.5 kg of trinitrotoluene (TNT). Fifteen people on board the train, and eleven people on the platform, were killed. One victim from the third carriage died from a head injury caused by an 8 mm (0.31 in) piece of metal.

It was announced over the speakers that due to technical problems, the train would have to unload the passengers at the next stop. About 40 minutes later, the train reached the station, and once its doors opened, the second female suspect detonated the second explosion, killing fourteen commuters.

Panic included stampedes at both stations, as commuters attempted to escape. The second attack was carried out by a dark-haired woman with the equivalent of 2 kg of TNT strapped to her waist. Both bombs were packed with metal nuts, bolts and screws, to increase the destructive impact of the blasts.

The two women who carried out the attacks wore explosive belts, presumably using detonation devices set inside their mobile phones and activated by a call to self. The attackers intended to strike during peak hours on a weekday when the subway would be at capacity. Eyewitnesses said that some survivors were so badly injured that they constantly splashed heavy amounts of blood on the floor and walls, until they were attended to by doctors