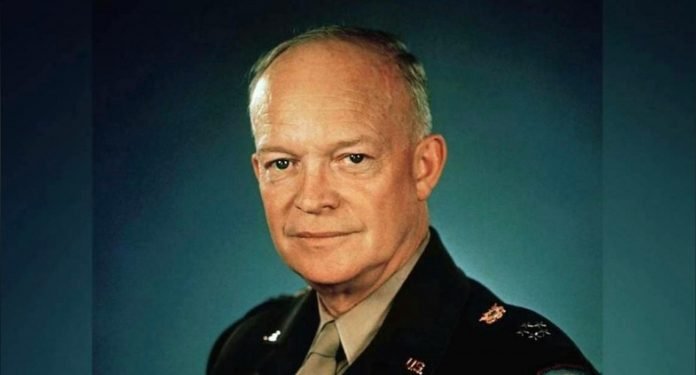 On this day 28 March 1969 Dwight D. Eisenhower, the 34th president of the United States and one of the most highly regarded American generals of World War II, dies in Washington, D.C., at the age of 78.

He was born in Denison, Texas, in 1890, Eisenhower graduated from the United States Military Academy in 1915, and after World War I he steadily rose in the peacetime ranks of the U.S. Army. After the U.S. entrance into World War II, he was appointed commanding general of the European theater of operations and oversaw U.S. troops massing in Great Britain.

In 1942, Eisenhower, who had never commanded troops in the field, was put in charge of Operation Torch, the Anglo-American landings in Morocco and Algeria.

He served as a supreme commander of a mixed force of Allied nationalities, services, and equipment, Eisenhower designed a system of unified command and rapidly won the respect of his British and Canadian subordinates. From North Africa, he successfully directed the invasions of Tunisia, Sicily, and Italy, and in January 1944 was appointed supreme Allied commander of Operation Overlord, the Allied invasion of northwestern Europe.

Although Eisenhower left much of the specific planning for the actual Allied landing in the hands of his capable staff, such as British Field Marshall Montgomery, he served as a brilliant organizer and administrator both before and after the successful invasion.

After the war, he briefly served as president of Columbia University before returning to military service in 1951 as supreme commander of the combined land and air forces of the North Atlantic Treaty Organization (NATO). Pressure on Eisenhower to run for U.S. president was great, however, and in the spring of 1952 he relinquished his NATO command to run for president on the Republican ticket.

In November 1952, “Ike” won a resounding victory in the presidential elections and in 1956 was reelected in a landslide. A popular president, he oversaw a period of great economic growth in the United States and deftly navigated the country through increasing Cold War tension on the world stage. In 1961, he retired with his wife, Mamie Doud Eisenhower, to his farm in Gettysburg, Pennsylvania. He died in 1969 and was buried on a family plot in Abilene, Kansas.