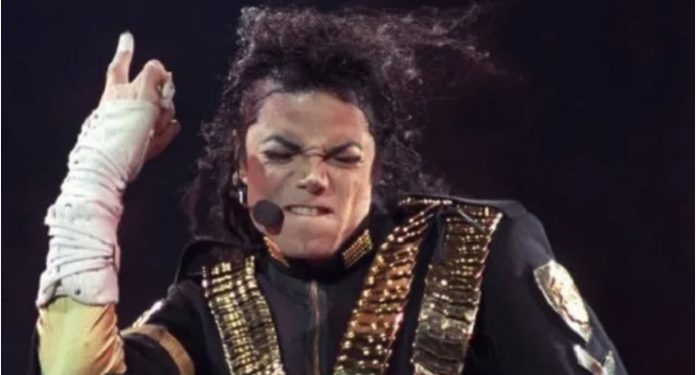 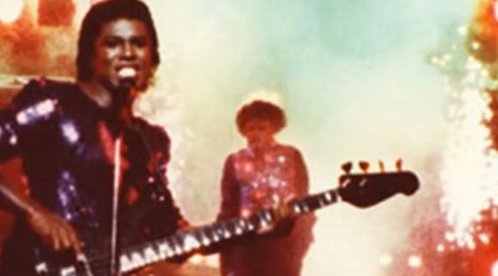 Michael Jackson, standing behind one of his brothers, at the moment his hair caught on fire (Photo via YouTube)

On January 27, 1984, Michael and his brothers were doing just that. It didn’t go well: At the Shrine Auditorium in Los Angeles, in front of an audience of 3,000, assembled to create the concert environment, Michael was dancing to his hit “Billie Jean.” During the sixth take for the commercial, he apparently veered too close to a pyrotechnics display, which had gone off a bit too early. He was set ablaze by the fireworks, suffering second-degree burns to his scalp and losing some of his hair. His jacket also caught on fire.

It was just supposed to be a routine commercial shoot: Michael Jackson, just 25 years old, was the biggest star in the world, his 1982 Thriller album having logged the better part of a year at #1. In the fall of ’83 he and his Jackson Five brothers signed a $5 million endorsement deal with PepsiCo that would include, among other promotions, Michael appearing in commercials pushing the soft drink.

Jackson’s brothers quickly helped to extinguish the flames and Michael seen by his fans with his scalp glowing and smoke billowing from his head. Following the incident, Jackson—his head bandaged and seen smiling even as he was in pain—was rushed to Cedars-Sinai Medical Center. There he was treated and declared out of mortal danger, but the singer was then transferred by ambulance to Brotman Memorial Hospital Burn Center in Culver City, California. It was later determined that the pomade Jackson used in his hair was the culprit, catching fire when he neared the fireworks. Still, regardless of the cause, Jackson underwent treatment to hide the scars and had his third nose job shortly thereafter.

It was later reported that the pain Jackson suffered on his scalp from the burns was prolonged and led to his prescription pill addiction. His hair never grew back properly either, which reportedly led to Jackson wearing wigs.

Michael Jackson in the aftermath of the incident, on his way to the hospital

There would, of course, also be legal action. Pepsi settled out of court with Jackson, and the performer donated the $1.5 million payment to the Brotman Medical Center; its Michael Jackson Burn Center was subsequently named in his honor.

No hard feelings, though: Jackson later signed another deal with Pepsi, this time for $10 million.

It is believed to be the real Michael Jackson, who was injured during this time period. Although the public was shown Jackson after being burned, what we had seen, was a clone version of him. In ultimate secrecy, Jackson was switched with his clone.

Jackson was then taken to Cedars-Sinai Medical Centre located in Los Angeles. During this time, Jackson was at the peak of his career. His album Thriller, gained huge acclaim by the end of 1982. Later, he would go on to win a record breaking eight Grammy awards in February.

Both Michael and his brothers, signed a $5 million dollar promotional deal with Pepsi previously. Pepsi paid Jackson $1.5 million in compensation. Michael then donated this to the Brotman Medical Centre, which helped treat him. Jackson was prescribed the painkiller Darvocet, it was banned later for its potentially harmful side-effects. He also was taking Flurazepam, for his pain which was later marketed as Dalmane.

Advertising executive Phil Dusenberry, one of the engineers of the Pepsi-Jackson endorsement deals, later titled his memoir Then We Set His Hair on Fire: Insights and Accidents from a Hall of Fame Career in Advertising