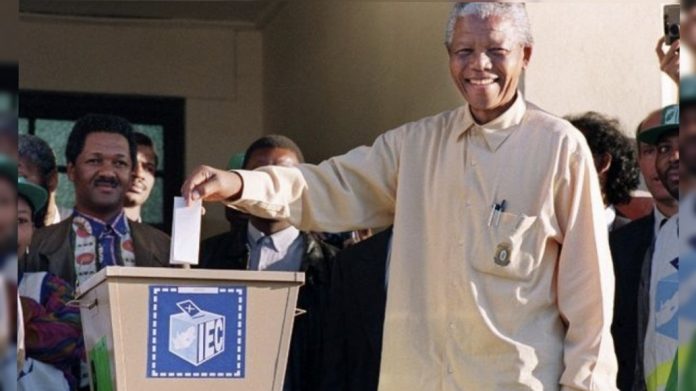 General elections were held in South Africa between 26 and 29 April 1994. The elections were the first in which citizens of all races were allowed to take part, and were therefore also the first held with universal suffrage.

The election was conducted under the direction of the Independent Electoral Commission (IEC), and marked the culmination of the four-year process that ended apartheid.

In May, Mandela was inaugurated as president, becoming South Africa’s first Black head of state. In 1944, Mandela, a lawyer, joined the African National Congress (ANC), the oldest Black political organization in South Africa, where he became a leader of Johannesburg’s youth wing of the ANC.

In 1952, he became deputy national president of the ANC, advocating nonviolent resistance to apartheid–South Africa’s institutionalized system of white supremacy and racial segregation. However, after the massacre of peaceful Black demonstrators at Sharpeville in 1960, Mandela helped organize a paramilitary branch of the ANC to engage in guerrilla warfare against the white minority government.

Mandela spent the first 18 of his 27 years in jail at the brutal Robben Island Prison. Confined to a small cell without a bed or plumbing, he was forced to do hard labor in a quarry. He could write and receive a letter once every six months, and once a year he was allowed to meet with a visitor for 30 minutes.

However, Mandela’s resolve remained unbroken, and while remaining the symbolic leader of the anti-apartheid movement, he led a movement of civil disobedience at the prison that coerced South African officials into drastically improving conditions on Robben Island. He was later moved to another location, where he lived under house arrest.

Mandela subsequently led the ANC in its negotiations with the minority government for an end to apartheid and the establishment of a multiracial government. In 1993, Mandela and de Klerk were jointly awarded the Nobel Peace Prize. One year later, the ANC won an electoral majority in the country’s first free elections, and Mandela was elected South Africa’s president, a position he held until 1999.

The date 27 April is now a public holiday in South Africa, Freedom day. On this day was the crowning moment in the life of Nelson Mandela the day South Africa held its first elections open to citizens of every race.