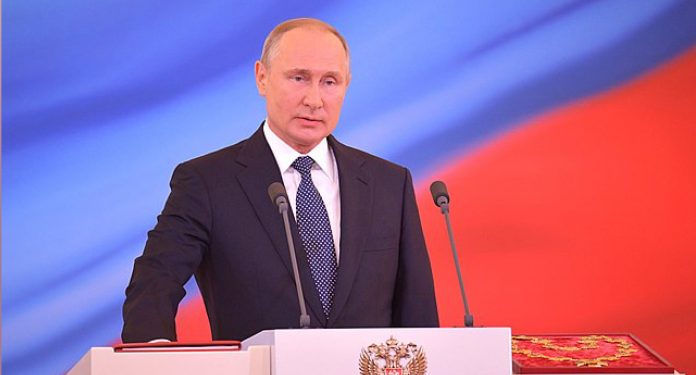 The 2000 Russian presidential election was held on 26 March 2000. Vladimir Putin who was the Prime Minister of Russia, had succeeded Boris Yeltsin on his resignation on 31 December 1999 – won the elections in the first round.

Acting President Putin received 53.4% of the vote, defeating communist candidate Gennady Zyuganov and economist Grigory Yavlinsky in the first round.

The president is elected directly through a popular vote to a six-year term. The Constitution of the Russian Federation established term limits for the presidency restricting the officeholder to serve no more than two terms. However the framework established by the constitution has since been overhauled in large part due to the 2020 Russian Constitutional Amendments. One of the amendments passed reset the terms of both Vladimir Putin and Dmitry Medvedev, allowing either to serve as president for a full two terms regardless of their previous terms. In all, three individuals have served four presidencies spanning six full terms. In May 2012, Vladimir Putin became the fourth president; he was re- elected in March 2018 and inaugurated in May to a six-year term. He will be eligible for election in 2024.

When Vladimir Putin was named president in 1999, Russia’s constitution limited the president to two consecutive terms. That’s why, after his second term ended in 2008, he served as Prime Minister before becoming President again in 2012. However, in January 2020 Putin drafted a constitutional amendment that would allow him to remain president for two more terms. It was included in a package of amendments that was approved by the Russian legislature and, in July 2020, by Russian voters in a national referendum.

How Has Vladimir Putin Changed Russia?

In the two decades of Vladimir Putin’s reign, he has consolidated his rule and projected to the Russian people an image of Russia as a global power. He turned Russia from a nascent democratic state into an autocratic one, expanded Russia’s influence in the Middle East, strengthened Russian relations with China, and displayed a willingness to use force to achieve his goals, as in his annexation of Crimea in 2014 and his large-scale invasion of Ukraine in 2022.

Following the collapse of the Sovient Union in 1991, Ukraine moved toward closer integration with Europe. When pro-Russian Ukrainian Pres. Viktor Yanukovych tried to reverse that trend in 2014,Protests swept him for power. Having lost an ally, Vladimir Putin invaded and annexed the Ukrainian autonomous republic of Crimea. He also provoked separatist uprisings in Donetsk and Luhansk, two regions in eastern Ukraine; fighting between pro-Russian militias and the Ukrainian government continued there for years. Running on a populist reform platform, Volodymyr Zelensky was elected president of Ukraine in 2019 with more than 70 percent of the vote. In 2021 Putin ordered a buildup of troops along Russia’s border with Ukraine, and in February 2022, after he announced the beginning of a “special military operation,” Russian forces invaded Ukraine.

In 1996 Putin moved to Moscow, where he joined the presidential staff as deputy to Pavel Borodin, the Kremlin’s chief administrator. Putin grew close to fellow Leningrader Anatoly Chubias and moved up in administrative positions.