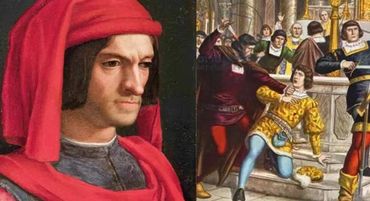 It’s Easter on 26th April 1478, a beautiful Sunday morning in Florence. The cathedral is slowly filling with people, while the plotters are ready to strike.

Lorenzo and Giuliano are attending Mass, and the murderers are waiting for the signal. As the host is raised heavenward, the two brothers are attacked.

Lorenzo reacts swiftly against his attackers, the two priests clearly not very good with swords, and manages to escape into the sacristy. Giuliano is less lucky. He’s brutally stabbed by Francesco de’ Pazzi with no less than 19 wounds. Blood stains the floor of Santa Maria del Fiore Cathedral.

Blood has been spilled but the coup has missed its mark. News of the crime spread quickly all over Florence, and the Medici friends and their followers go on the hunt for the guilty party.

Jacopo de’ Pazzi, who was brought back to Florence after trying to escape to the Apennines, is taken as a prisoner, and hanged from one of Palazzo Vecchio’s windows. The same fate was to befall Francesco de’ Pazzi, his cousin Renato, and Salviati. And by the end the entire Pazzi family was dealt with, the majority killed, and the rest imprisoned or exiled.

Even Guglielmo de’ Pazzi, husband of Lorenzo’s sister Bianca – a marriage that was supposed to make the two families united and peaceful – was condemned to lifelong exile. The memory of the Pazzi was erased from the annals of Florence, their property confiscated and their coats of arms removed.

Giuliano was buried and mourned, while Lorenzo emerged from the Pazzi conspiracy with reinforced power and prestige. Known as “the Magnificent” he had no official title in the Republic, and yet remained its leader until his death in 1492.