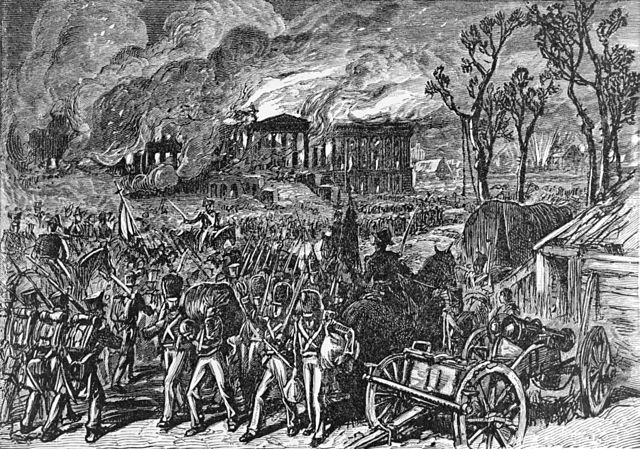 Today in history On August 24, 1814, British troops led by Major General Robert Ross, accompanied by Rear Admiral George Cockburn, attacked the capital city with a force of 4,500 “battle hardened” men.[18][19] The plan to attack Washington had been formulated by Rear Admiral Cockburn, who predicted that “within a short period of time, with enough force, we could easily have at our mercy the capital”.[20] Major General Ross commanded the troops, and was less optimistic.[11] While Cockburn recommended burning the entire city, Ross planned to damage only public buildings. Ross was adamant in avoiding private property damage and banning all contact between the British Army and Washington civilians because he remembered the complete breakdown in order and discipline numerous times while serving in the British Army in the Peninsular War when British soldiers after many battles notoriously sacked and committed massacres and rapes in many Spanish cities on their own Spanish civilian allies (most infamously at Badajoz, Ciudad Rodrigo, Vitoria, and San Sebastian) despite the generals and officers trying their best to maintain order. This “only public buildings” order from Ross made sure the burning of Washington led to no civilian casualties.[19][21]

President James Madison, members of his government, and the military fled the city in the wake of the British victory at the Battle of Bladensburg. They eventually found refuge for the night in Brookeville, a small town in Montgomery County, Maryland, which is known today as the “United States’ Capital for a Day.” President Madison spent the night in the house of Caleb Bentley, a Quaker who lived and worked as a silversmith in Brookeville. Bentley’s house, known today as the Madison House, still stands in Brookeville