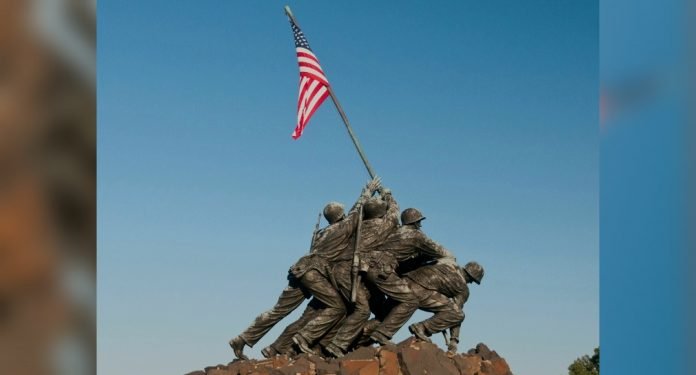 The U.S. flag was raised at Iwo Jima on Mt. Suribachi, the Alamo siege began, Jonas Salk discovered the polio vaccine, and a sheep named Dolly was cloned at the Roslin Institute in this Day in History video. Joe Rosenthal won a Pulitzer prize in Photography for his picture of the flag raising at Iwo Jima.

The first raising is actually not the one depicted in the now-famous picture. The first flag was taken down, and Rosenthal took a picture as a second flag was raised.

Regardless, the photo has become a symbol of victory of WWII. But the flag raising wasn’t always seen in that light.

The battle for Iowa Jima was one of the bloodiest of WWII. U.S. forces began the fight for the Japanese island of Iwo Jima on February 19th, which lasted for over a month.

Frank Matthews was an 18-year-old private at the time. He was part of a team providing relief for a 900-man regiment that had basically been wiped out on the first day of fighting.

“They lost 750 in one five hour stretch,” Matthews said last year. “Every inch of that beach and everything around it had been pinned down and zeroed in by the Japanese guns.”

The U.S. went on to win the fight for the island, which was used as an emergency landing site for bombers attacking the mainland.

And the photo, of course, was memorialized in bronze and dedicated to the U.S. Marine Corps by President Dwight D. Eisenhower in 1954.

was later used for the construction of the Marine Corps War Memorial in 1954, which was dedicated to honor all Marines who died in service since 1775.

The memorial, sculpted by Felix de Weldon, is located in Arlington Ridge Park, [1] near the Ord-Weitzel Gate to Arlington National Cemetery and the Netherlands Carillon. The photograph has come to be regarded in the United States as one of the most significant and recognizable images of World War II.

The flag raising occurred in the early afternoon, after the mountaintop was captured and a smaller flag was raised on top that morning. Three of the six Marines in the photograph Sergeant Michael Strank, Corporal Harlon Block, and Private First Class Franklin Sousley were killed in action during the battle Block was identified as Sergeant Hank Hansen until January 1947 and Sousley was identified as PhM2c. John Bradley, USN, until June 2016.

The other three Marines in the photograph were Corporals (then Privates First Class) Ira Hayes, Harold Schultz, and Harold Keller Schultz was identified as Sousley until June 2016 and Keller was identified as Rene Gagnon until October 2019.  All of the men served in the 5th Marine Division on Iwo Jima.

In the United States this photograph has become one of the most significant and recognizable images of World War II.

The image was used by Felix de Weldon in 1954 to sculpt the Marine Corps War Memorial located adjacent to Arlington National Cemetery just outside Washington, D.C. The memorial is dedicated to all Marines who died for their country past and present.