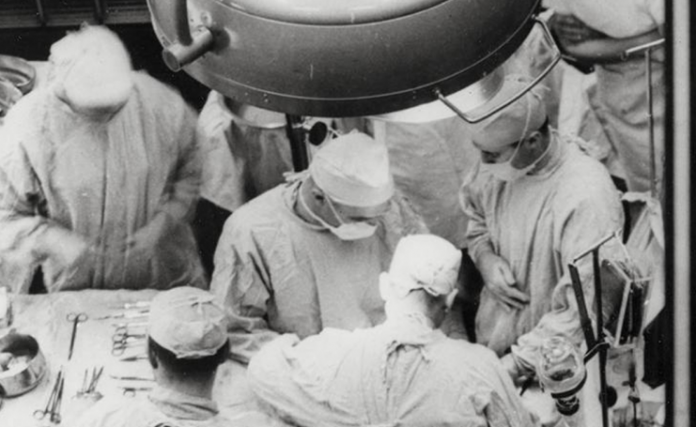 The world’s first successful transplant of an internal organ from one living person to another took place on December 23, 1954, at the Peter Bent Brigham Hospital, in Boston. By a remarkable coincidence, though, the story began for me exactly ten years earlier.

On that day, December 23, 1944, a 22–year–old airman, Charles Woods, met with a devastating accident. Woods was assigned to fly the “Hump” over the Himalayas—from Kurmitola, India, to Lüliang, China—ferrying fuel to the Flying Tigers of the Chinese Army, who were fighting the Japanese. An error by Woods’s copilot caused their plane to explode on takeoff. The fire caused third–degree burns over 70 percent of Woods’s body, and it erased his face. No one had ever recovered from such massive burns. Lacking functional skin, Woods was prey to severe fluid loss, infection, shock, and death.

I was the junior member of a U.S. Army surgical team charged with saving Woods’s life. Our only hope was to drape on him the skin of another soldier who had died—to “transplant” skin from one human to another. Since Woods’s immune system would reject this skin as foreign, our probability of success was low. Fortunately, the foreign skin was not rejected as swiftly as we had feared; the trauma and resulting malnutrition had slowed the airman’s immune response. This delay, coupled with his remarkable will to live, allowed him to slowly regenerate his own skin, sparing him from death.

Our next challenges were to recraft Woods’s face and to create hands that might allow him to again pilot a plane one day. Over nearly two years, we performed 24 operations. Taking skin from other parts of his body, we rebuilt his nose, ears, eyelids, and lips as best we could, and we gave him functional hands. Still, Woods looked nothing like the person he had been and, likely, resembled no one you have ever seen. When we had done all we could, Woods looked in the mirror, walked out into the world, married, raised a family, began flying again, built a successful business, and lived another 58 years.

Thus, in one of my earliest experiences as a surgeon, I had reconstructed a badly damaged face and had taken an organ—in this case, skin—from one person and transplanted it to another. Although I did not know it then, those two themes would come to dominate my professional life. Half a century later, I would watch as others fused the two themes into one with the advent of face transplantation—but I’m getting ahead of the story.

I returned from the war to the Brigham and Harvard Medical School, recruited by the brilliant young chairmen of the departments of surgery and medicine—Francis Moore ’39 and George Thorn—to help them pursue a radical dream. Moore and Thorn were determined to cure chronic kidney failure, a disease that, at that time, was a death sentence. Another young recruit, John Merrill ’42, had modified a dialysis machine that could temporarily filter the blood in place of kidneys that had stopped working; back then, though, dialysis could not provide long–term support for kidneys that had permanently shut down. Moore and Thorn were convinced that kidney transplantation could be a viable treatment for permanent kidney failure, and they wanted me to be part of a team to turn their dream into a reality.

It was a daunting challenge. First, we had to figure out the human anatomy. Although Alexis Carrel had described vascular suturing in the early 1900s, we had to figure out the best location in the abdomen to hook up the new kidney’s blood vessels to the patient’s own. Nerves posed another problem: Once the tiny slips of nerves that ran through the kidneys were severed, they could not all be reconnected. Then there were the lymphatics. Would a new, transplanted kidney need to be hooked up to a person’s lymph system in order to remain alive? No one knew.

The anatomical hurdles were low, however, compared to the immunological one: How could a transplanted organ avoid rejection? Before human organ transplantation could take a first step, we had to solve the immunological challenge—or render it moot. In October 1954, fate rendered it moot.

In the fall of 1953, while serving a tour of duty on a Coast Guard vessel in the Great Lakes, Richard Herrick fell ill. The 22–year–old’s kidneys were inexplicably failing. Herrick was told that this condition was incurable and that he had two years to live. By August 1954, he could barely walk.

Richard’s distraught brother, Ronald, met with Richard’s private physician, David Miller. Ronald said he would do anything to help his brother. When told there was nothing anyone could do, Ronald persisted. “Doctor, I’d give him one of my own kidneys if it would help,” he said. Miller started to explain that a transplant wouldn’t work because Richard’s body would reject his brother’s kidney, but the doctor stopped mid–sentence. Richard and Ronald, he suddently remembered, were identical twins.

By a stroke of luck, Miller knew about our transplant program. On October 26, 1954, Richard was transferred to the Peter Bent Brigham Hospital. He was gaunt and white from severe anemia. Uremia had affected his brain, making him a difficult patient, disoriented and combative. He cursed the medical staff and accused them of sexually assaulting him. He bit a nurse who was trying to change his sheets. He pulled out his intravenous lines and catheters. In short, he was a handful. If Richard had anything to say about it, we would not give him treatment of any kind—let alone place another person’s kidney into his belly.

As for Ronald, his offhand comment to Miller about donating a kidney had triggered a cascade of events, but did he really understand what his offer entailed? For that matter, did we? The kidneys are vital organs. Do we really need the two we are born with, or is the second just an insurance policy? Actuarial tables at the time suggested that living with one kidney carried no increased risk, but the data were weak.

Moreover, the surgical procedure needed to remove Ronald’s kidney contained undeniable risks—complications from general anesthesia, hemorrhage, accidental injury of a nearby vital organ, infection. This list of potential risks posed an ethical dilemma for us. While we routinely asked patients to incur some risk in order to achieve a benefit for themselves, none of us had ever asked a healthy person to accept this magnitude of risk solely for the sake of someone else.

We consulted with experienced physicians within and outside of the Brigham, clergy of all denominations, and legal counsel before offering the option of transplantation. The team met several times with the family to describe in detail what was involved for Ronald and Richard. We advised neither for nor against the operation, and we stated the obvious: We could not know if it would work.

Ronald and the family wrestled with unanswerable questions. “It was shocking to me even to consider the idea of giving up my kidney,” Ronald told me after the operation. “I felt a real conflict of emotions. Of course, I wanted to help my brother, but the only operation I’d ever had was an appendectomy, and I hadn’t much liked that.” Ultimately, the decision was settled for Ronald by the undeniable fact that his kidney was his brother’s only hope. Once Ronald had made up his mind, there was no turning back. Richard, though, wasn’t so sure. In a lucid moment on the eve of the operation, Richard sent an urgent note to Ronald’s hospital room: “Get out of here and go home!” Ronald wrote in reply, “I am here, and I am going to stay.”

Several days before the operations were scheduled, the press became aware of what was about to happen. Suddenly, the whole world was watching. The media quoted doctors who said the experiment was not only doomed to failure but also unethical. Those of us on the surgical team began to understand what it felt like to be a pitcher in the World Series. The difference was that, unlike that pitcher, we were about to attempt something we had never done before.

The operations began at 8:15 on the morning of December 23. My team opened Richard’s abdomen and isolated the main blood vessels we would attach to the new kidney, ready to cut them the moment the new kidney arrived. In the next room, a team led by J. Hartwell Harrison ’33 was operating on Ronald, ready to remove one of his kidneys the moment I gave the signal. The twins lay 50 yards apart, Ronald under general anesthesia and Richard sedated and under continuous spinal anesthesia.

When everything was ready, I took a deep breath and gave Harrison the go–ahead. Timing was critical: From the moment we disconnected Ronald’s kidney from its blood supply to the moment we attached it to Richard’s circulatory system, the kidney would be without oxygen and nutrients. The longer the interruption, the greater the chance that Ronald’s kidney would sustain damage—and thus fail to keep Richard alive.

We started connecting Ronald’s kidney to Richard’s blood vessels at 10:10 a.m. and finished one hour and 22 minutes later. Had we taken too long? As we removed the clamps on the vessels and Richard’s blood began to flow into his new organ, the operating room fell silent. We watched—some with fingers crossed, some saying silent prayers—as the transplanted kidney gradually turned pink and plumped up, engorged by Richard’s blood. Then urine began flowing briskly. There were grins all around. Two hours later, Richard and Ronald were in the recovery room, slowly awakening from anesthesia.

Both Richard and Ronald recovered smoothly. Ronald’s single kidney was doing the job of two, and Richard’s new kidney was more than compensating for his two diseased ones. Richard’s improvement was stunning. Within a week, his erratic behavior disappeared. His appetite sharpened, his pallor gave way to his normally ruddy complexion, and his energy level returned. Richard left the hospital after two weeks and continued a courtship he had begun with a nurse who had cared for him in the recovery room. They subsequently married and had two children.

Throughout the next few years, our team at the Brigham performed several more successful kidney transplantations on identical twins. We also began to transplant kidneys between people who were not genetically identical, using various techniques to fight tissue rejection. Although we had several successes, for eight years most of our efforts ended in failure. People who were destined to die young, died young anyway, despite our best efforts. While our colleagues sometimes judged us harshly, our patients and their families did not. They understood that our treatment might well fail but that they had no other hope.

Fortunately, major discoveries in immunology and pharmacology by a pantheon of doctors and scientists—including Robert Schwartz, William Dameshek ’23, George Hitchings, and Gertrude Elion—led to drugs that stifled tissue rejection without unacceptable toxicity. Other surgeons—Jean Hamburger, René Küss, Roy Calne, and Thomas Starzl, to name a few—also made important contributions to the techniques for transplanting kidneys. Still others pioneered the transplantation of other organs.

In the late 1960s, I left the field of organ transplantation and spent the rest of my surgical career repairing faces, and other parts of the head and neck, that had been damaged by injury or disease, as well as faces that bore congenital deformities. By 1986, when I retired from surgery, organ transplantation and facial reconstructive surgery had become separate and distinct fields.

Then, on November 27, 2005, those fields fused. Jean–Michel Dubernard, who had once worked at our HMS surgical research laboratory, performed the world’s first partial face transplant in Amiens, France, on a woman whose face had been destroyed during a dog attack. Face transplantation has since been performed successfully elsewhere, including in a program at Brigham and Women’s that began in 2009.