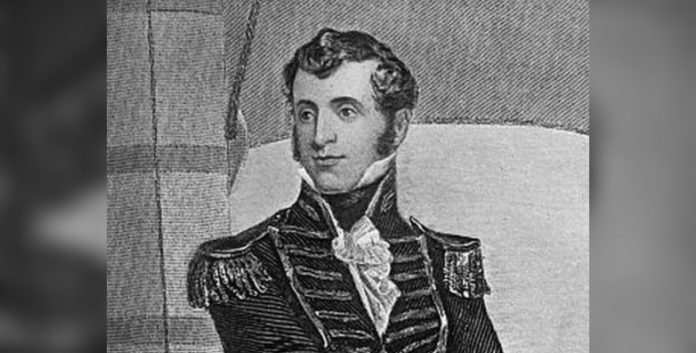 On this day 22 March 1820 the U.S. Navy officer Stephen Decatur, hero of the Barbary Wars, is mortally wounded in a duel with disgraced Navy Commodore James Barron at Bladensburg, Maryland. Although once friends, Decatur sat on the court-martial that suspended Barron from the Navy for five years in 1808 and later opposed his reinstatement, leading to a fatal quarrel between the two men. Decatur and Barron lifted their guns, fired, and each man hit his target.

Decatur died several hours later in Washington, and the nation mourned the loss of the great naval hero. Barron recovered from his wounds and was reinstated into the Navy in 1821 with diminished rank.

He was born in Maryland in 1779, Stephen Decatur was reared in the traditions of the sea and in 1798 he joined the United States Navy as a midshipman aboard the new frigate, United States.

That year, he saw action in the so-called quasi-war with France and in 1799 was commissioned a lieutenant. Five years later, during the Tripolitan War, he became the most lauded American naval hero since John Paul Jones.

Appointed to the Navy Board of Commissioners, Decatur arrived in Washington in 1816, where he became a prominent citizen and lived a satisfying life politically, economically, and socially. In 1818, however, dark clouds began to gather when he vocally opposed Barron’s reinstatement into the Navy. The already strained relations between the two men deteriorated, and in March 1820 Decatur agreed to Barron’s request to meet for a duel. Dueling, though generally frowned on, was still acceptable among Navy men.

In 1801, President Thomas Jefferson ordered U.S. Navy vessels to the Mediterranean Sea in protest of continuing raids against U.S. ships by pirates from the Barbary states—Morocco, Algeria, Tunis, and Tripolitania. Sustained action began in June 1803, and in October the U.S. frigate Philadelphia ran aground near Tripoli and was captured by Tripolitan gunboats.

The Americans feared that the well-constructed warship would be used as a model for building future Tripolitan frigates, and on February 16, 1804, Stephen Decatur led a daring expedition into Tripoli harbor to destroy the captured vessel.

After disguising himself and his men as Maltese sailors, Decatur’s force sailed into Tripoli harbor and boarded the Philadelphia, which was guarded by Tripolitans who were quickly overpowered by the Americans. After setting fire to the frigate, Decatur and his men escaped without the loss of a single American. The Philadelphia subsequently exploded when its gunpowder reserve was lit by the spreading fire.

In the War of 1812, Decatur distinguished himself again when, as commander of the USS United States, he captured the British ship of war Macedonian off the Madeira Islands. Barron, meanwhile, was overseas when his Navy expulsion ended in 1813 and did not return to the United States to fight in the ongoing war with England. This led to fresh criticism of Barron from Decatur, who later used his influence to prevent Barron’s reinstatement in the Navy.

In June 1815, Decatur returned to the Mediterranean to lead U.S. forces in the Algerian War, the second Barbary conflict. By December, Decatur forced the dey (military ruler) of Algiers to sign a peace treaty that ended American tribute to Algeria. Upon his return to the United States, he was honored at a banquet in which he made a very famous toast: “Our country! In her intercourse with foreign nations may she always be in the right; but our country, right or wrong!”