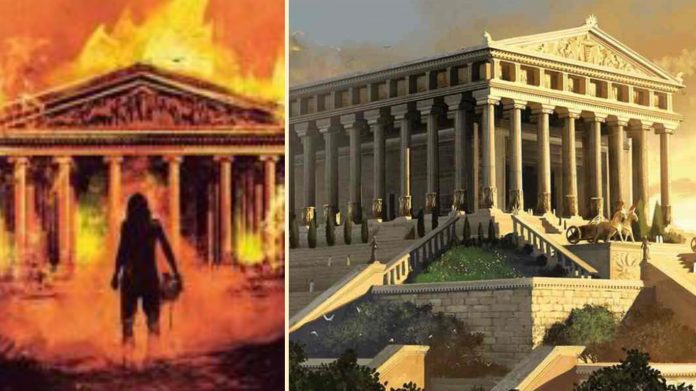 On the 21st of July in 356 BC, Alexander the Great was born. On the very same day, the Temple of Artemis, one of the Seven Wonders of the Ancient World, was burned down by a mad arsonist named Herostratus.

“I, myself, burned the temple. I couldn’t have shared this victory with anyone else. I felt the horror to my joints. Now its over. First, I was very scared then it all went away once I imagined the fame I would have…”

Herostratus was a young Greek man from Ephesus, the ruins of which are situated in the western Turkish province of (Smyrna) Izmir. He aspired to leave his mark in history and die as known man, and in order to achieve his goal, Herostratus set the Temple of Artemis ablaze.

He set a fire in the wooden roof beams of the temple, which quickly took hold and reduced the entire temple to rubble. He made no attempt to flee and was captured and tortured on the rack. He claimed he had only destroyed the temple so that his name might be immortalised and live in infamy forever. The Ephesians, concerned that anyone should attempt to gain fame simply through acts of destruction or terror, not only executed the arsonist but also issued a law preventing his name ever being mentioned.

Subsequently, he was caught and tortured by the authorities. Herostratus was not only executed but condemned with damnatio memoriae meaning  “condemnation of memory”, a punishment forbidding the culprit’s name to to be uttered by anyone and mentioned in written sources forever. As apparent, his name didn’t vanish the way the Greek courts had decreed. On the contrary, the term “herostratic fame” was coined from this event which means “to do anything to gain fame”.

The temple of Artemis was world-renowned due to its vast size, about 110 by 55 metres, and the remarkably artisanal works it beheld.

After the temple was burned down, the folks of Ephesus were bewildered with a question: Why did the goddess Artemis not protect the temple?” The story goes that she was supposedly aiding the birth of Alexander the Great and left the temple unattended for a day.

After it was burnt down, the temple was rebuilt, this time bigger and more magnificent. Available to the folks of Ephesus as the prime place of worship for another century, it was not too long after that the temple’s fate was tested again and the temple of Artemis was decimated by the Goth invaders in 262 AD, never to be built again.