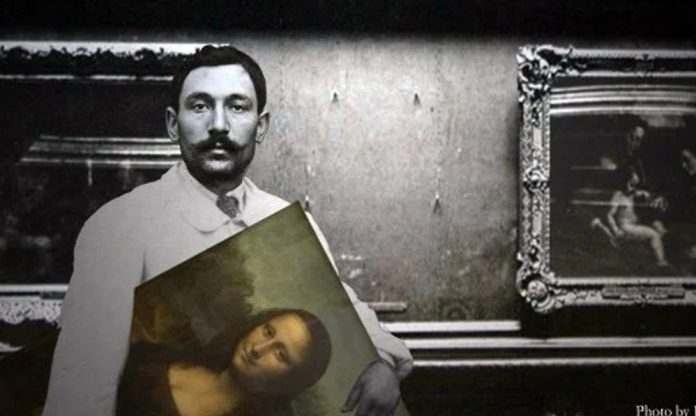 On August 21 1911, the Mona Lisa vanished under mysterious circumstances from the Louvre in Paris. Vincenzo Peruggia, an Italian artist who had been working at the gallery took the painting from the Salon Carré where it hung to a nearby service staircase, where he removed the protective case and frame.

It is believed that Vincenzo left the Louvre, concealing the painting under his coat.

There is another version that Vincenzo did not act alone but had spent the night in an art-supply closet with two other men. And on that Sunday morning 21 August 1911, with the Louvre still closed, they slipped out of the closet and lifted 200 pounds of painting, frame and protective glass case off the wall. Stripped  its frame and case, covered it with a blanket and hustled off to the Quai d’Orsay station, where the trio boarded a 7:47 am express train out of the city.

The Mona Lisa is a half-length portrait painting by Italian artist Leonardo da Vinci. Considered an archetypal masterpiece of the Italian Renaissance, it has been described as “the best known, the most visited, the most written about, the most sung about, the most parodied work of art in the world.

People flocked to the Louvre to view the empty space where the painting had once hung, the museum’s director of paintings resigned, and the poet Guillaume Apollinaire and artist Pablo Picasso were even arrested as suspects.

Two years later an art dealer in Florence alerted local authorities that a man had tried to sell him the painting. Police found the portrait stashed in the false bottom of a trunk belonging to Vincenzo Peruggia, an Italian immigrant who had briefly worked at the Louvre fitting glass on a selection of paintings, including the Mona Lisa. He and possibly two other workers had hidden in a closet overnight, taken the portrait from the wall the morning of August 21, 1911, and run off without suspicion.

Peruggia was arrested, tried, and imprisoned, while the Mona Lisa took a tour of Italy before making its triumphant return to France.


Before its theft in 1911, the “Mona Lisa” was not widely known outside the art world. Leonardo da Vinci painted it in 1507, but it wasn’t until the 1860s that critics began to hail it as a masterwork of Renaissance painting. And that judgment didn’t filter outside a thin slice of French intelligentsia.

Mona Lisa is an oil painting on a poplar wood panel by Leonardo da Vinci. It was painted when Leonardo was living in Florence, and it now hangs in the Louvre Museum Paris.

The sitter’s mysterious smile and her unproven identity have made the painting a source of ongoing investigation and fascination.

The painting presents a woman in half-body portrait, which has as a backdrop a distant landscape. Yet this simple description of a seemingly standard composition gives little sense of Leonardo’s achievement. The three-quarter view, in which the sitter’s position mostly turns toward the viewer, broke from the standard profile pose used in Italian art and quickly became the convention for all portraits, one used well into the 21st century. The subject’s softly sculptural face shows Leonardo’s skillful handling of sfumato (use of fine shading) and reveals his understanding of the musculature and the skull beneath the skin. The delicately painted veil, the finely wrought tresses, and the careful rendering of folded fabric demonstrate Leonardo’s studied observations and inexhaustible patience. Moreover, the sensuous curves of the sitter’s hair and clothing are echoed in the shapes of the valleys and rivers behind her. The sense of overall harmony achieved in the painting—especially apparent in the sitter’s faint smile—reflects Leonardo’s idea of the cosmic link connecting humanity and nature, making this painting an enduring record of Leonardo’s vision.

In its exquisite synthesis of sitter and landscape, the Mona Lisa set the standard for all future portraits.

There has been much speculation and debate regarding the identity of the portrait’s sitter. Scholars and historians have posited numerous interpretations, including that she is Lisa del Giocondo (née Gherardini), the wife of the Florentine merchant Francesco di Bartolomeo del Giocondo, hence the alternative title to the work, La Gioconda. That identity was first suggested in 1550 by artist biographer Giorgio Vasari.

Another theory was that the model may have been Leonardo’s mother, Caterina. That interpretation was put forth by, among others, Sigmund Freud, who seemed to think that the Mona Lisa’s mysterious smile emerged from a—perhaps unconscious—memory of Caterina’s smile.

A third suggestion was that the painting was, in fact, Leonardo’s self-portrait, given the resemblance between the sitter’s and the artist’s facial features. Some scholars suggested that disguising himself as a woman was the artist’s riddle. The sitter’s identity has not been definitively proven. Numerous attempts in the 21st century to settle the debate by seeking Lisa del Giocondo’s remains to test her DNA and recreate an image of her face were inconclusive.

Leonardo da Vinci began painting the Mona Lisa about 1503, and it was in his studio when he died in 1519. He likely worked on it intermittently over several years. Small cracks in the paint, called craquelure, appear throughout the whole piece, but they are finer on the hands, where the thinner glazes correspond to Leonardo’s late period.

French King Francis I, in whose court Leonardo spent the last years of his life, acquired the work after the artist’s death, and it became part of the royal collection. For centuries the portrait was secluded in French palaces, until insurgents claimed the royal collection as the property of the people during the French Revolution (1787–99). Following a period hanging in Napoleon’s bedroom, the Mona Lisa was installed in the Louvre Museum at the turn of the 19th century.

During World War II the Mona Lisa, singled out as the most-endangered artwork in the Louvre, was evacuated to various locations in France’s countryside, returning to the museum in 1945 after peace had been declared. It later traveled to the United States in 1963, drawing about 40,000 people per day during its six-week stay at the Metropolitan Museum of Art in New York and at the National Gallery of Art in Washington DC. It also toured to Tokyo and Moscoe in 1974.

Scholars have noted that the Mona Lisa is in fairly good condition for its age. The poplar panel shows some evidence of warping from resistance to its original frame and to braces added by early restorers. To prevent the widening of a small crack, visible near the centre of the upper edge of the painting, dovetails were added to the back of the painting. Restorers later pasted heavy canvas over the crack and replaced the top dovetail.

The glass protecting the Mona Lisa was replaced with a bulletproof case after several attacks in 1956, one of which damaged an area near the subject’s left elbow. The Mona Lisa thus escaped harm from acts of vandalism in 1974 during the work’s visit to Tokyo and in 2009 when a museumgoer threw a ceramic mug at it.