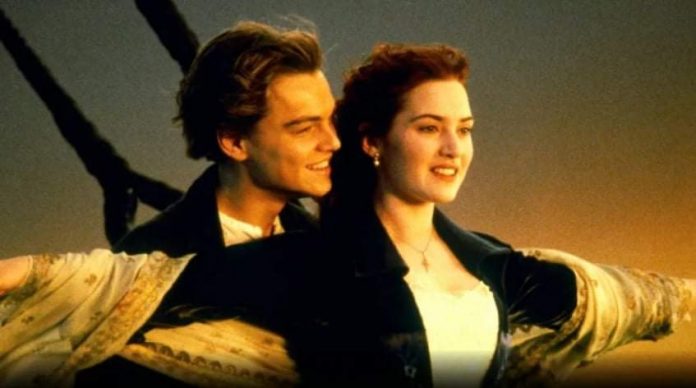 On 1st March in 1998, the epic romantic drama became the first film to gross over $1 Billion worldwide.

Titanic is an American epic romance and disaster film directed, written, produced, and co-edited by James Cameron. Incorporating both historical and fictionalized aspects, it is based on accounts of the sinking of the RMS Titanic, and stars Leonardo DiCaprio as Jack and Kate Winslet as Rose – members of different social classes who fall in love aboard the ship during its ill-fated maiden voyage.

At 2:20 a.m. on April 15, 1912, the British ocean liner Titanic sinks into the North Atlantic Ocean about 400 miles south of Newfoundland, Canada.

For 12 years, it was the highest grossing movie ever. The reign seemed unbeatable but James Cameron found a way to overcome his own monster. ‘Avatar‘, another Cameron film, knocked it off the top spot with an meteoric rise to over $2 Billion.

Titanic opened at number one, beating the James Bond Tomorrow Never Dies which bowed day and date, with a mammoth $28.6M over its debut weekend.

Cameron’s inspiration for the film came from his fascination with shipwrecks; he felt a love story interspersed with the human loss would be essential to convey the emotional impact of the disaster. Production began in 1995, when Cameron shot footage of the actual Titanic wreck. The modern scenes on the research vessel were shot on board the Akademik Mstislav Keldysh, which Cameron had used as a base when filming the wreck. Scale models, computer-generated imagery, and a reconstruction of the Titanic built at Baja Studios were used to re-create the sinking. The film was co-financed by Paramount Pictures and 20th Century Fox; the former handled distribution in North America while the latter released the film internationally. It was the most expensive film ever made at the time, with a production budget of $200 million.

2010. A 3D version of Titanic, released on April 4, 2012, to commemorate the centennial of the sinking, earned it an additional $343.6 million worldwide, pushing the film’s worldwide total to $2.195 billion and making it the second film to gross more than $2 billion worldwide (after Avatar). In 2017, the film was re-released for its 20th anniversary and was selected for preservation in the United States National Film Registry for being “culturally, historically or aesthetically significant”.