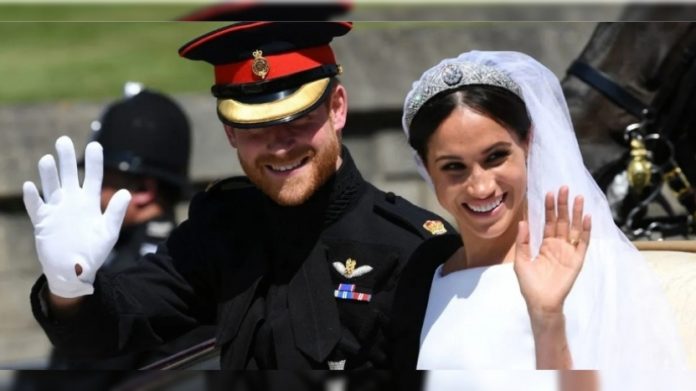 The wedding of Prince Harry and Meghan Markle was held on 19 May 2018 in St Georges Chapel at Windsor Castle in the United Kingdom.

The groom being the son of Prince Charles and the late Lady Diana. The bride an American who had previously worked as an actress, blogger, charity ambassador and advocate.

On the morning of the wedding, Prince Harry’s grandmother, Queen Elizabeth II, conferred upon him the titles of Duke of Sussex, Earl of Dumbarton and Baron Kulkeel.

Prince Harry and Meghan Markle, an American actress best known for her role in the Canadian-American legal-drama television series Suits, began their relationship in 2016 after having met in July of that year. The relationship was officially acknowledged on 8 November 2016, when a statement was released from the royal family’s communications secretary addressing the “wave of abuse and harassment” directed toward Markle.

2,640 people were invited to watch the wedding from inside the Castle Grounds. Many came from charities close to the couple, as well as over 1,200 who were nominated by their Lord Lieutenants.

Thousands of people lined the streets to see the couple, while the ceremony at St George’s Chapel was broadcast to TV audiences around the world.

Meghan’s stylist said she was “calm and chatty” ahead of the ceremony, and that Prince Harry felt “fantastic” after.

More than 13 million people watched the TV coverage on the BBC – peaking at 13.1 million just after 13:00 BST.

The wedding celebrations ended with a black-tie dinner and fireworks display at Frogmore House, near Windsor Castle.

The rings were made by Cleave and Company. The Duchess’ was fashioned from a piece of Welsh Gold, gifted by The Queen, The Duke’s was a Platinum Band with a textured finish.

The dress was designed by Clare Waight Keller for Givenchy.

The veil was held in place by Queen Mary’s diamond bandeau tiara, which was lent by The Queen.