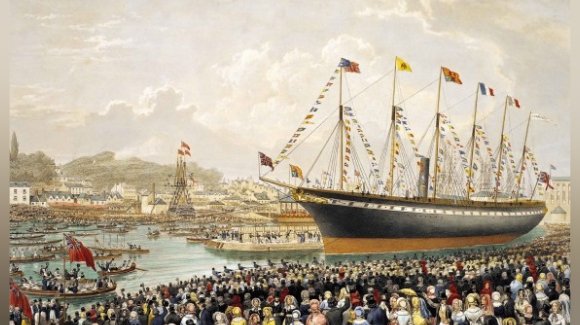 On July 19, 1843, British engineer Isambard Kingdom Brunel’s steamship the SS Great Britain was launched, becoming the first ocean-going craft with an iron hull and screw propeller as well as the largest vessel afloat in the world. Designed by Brunel for the Great Western Steamship Company’s transatlantic service between Bristol and New York, she was the longest passenger ship in the world from 1845 to 1854. While other ships had been built of iron or equipped with a screw propeller, Great Britain was the first to combine these features in a large ocean-going ship. She was the first iron steamer to cross the Atlantic, which she did in 1845, in the time of 14 days. Now listed as part of the National Historic Fleet, today she is an award-winning visitor attraction and museum ship in Bristol Harbour, with between 150,000 and 200,000 visitors annually.

The Great Britain is 322 feet (98 meters) in length and has a 3,400-ton displacement. She was powered by two inclined 2 cylinder engines of the direct-acting type, with twin 88-inch (220 cm) bore, 6-foot (1.8 m) stroke cylinders. She was also provided with secondary sail power. The four decks provided accommodation for a crew of 120, plus 360 passengers who were provided with cabins, dining, and promenade saloons.

When launched in 1843, Great Britain was by far the largest vessel afloat. However, her protracted construction and high cost had left her owners in a difficult financial position, and they were forced out of business in 1846 having spent all their funds re-floating the ship after she was run aground at Dundrum Bay after a navigational error. In 1852, she was sold for salvage and repaired. Great Britain carried thousands of immigrants to Australia from 1852 until converted to sail in 1881. Three years later, she was retired to the Falkland Islands where she was used as a warehouse, quarantine ship and coal hulk until scuttled in 1937. In 1970, following a cash donation by Sir Jack Hayward that paid for the vessel to be towed back to the United Kingdom, Great Britain was returned to the Bristol dry dock where she was built.

Large crowds started to gather early in the day including many people who had travelled to Bristol to see the spectacle. There was a general atmosphere of anticipation as the Royal Emblem was unfurled. The processional route had been cleaned and Temple Street decorated with flags, banners, flowers and ribbons. Boys of the City School and girls of Red Maids were stationed in a neat orderly formation down the entire length of the Exchange. The route was a mass of colour and everybody was out on the streets as it was a public holiday. The atmosphere of gaiety even allowed thoughts to drift away from the problems of political dissension in London.

Prince Albert arrived at 10 a.m. at the Great Western Railway terminus. The royal train, conducted by Brunel himself, had taken two hours and forty minutes from London. There was a guard of honor of members of the police force, soldiers and dragoons and, as the Prince stepped from the train, the band of the Life Guards played works by Labitsky and a selection from the “Ballet of Alma”. Two sections of the platform were boarded off for the reception and it was noted by The Bristol Mirror that parts were covered with carpets from the Council House. The Prince Consort, dressed as a private gentleman, was accompanied by his equerry-in-waiting, personal secretary, the Marquess of Exeter, and Lords Wharncliffe, Liverpool, Lincoln and Wellesley.

Introductions were made, followed by the “Address to His Royal Highness the Prince Albert”, by the town clerk, D. Burgess. Honors were then bestowed on him by the Society of Merchant Venturers, and there were speeches from members of the Bristol clergy. The royal party then had breakfast and, after 20 minutes, reappeared to board horse-drawn carriages.

At noon, the Prince arrived at the Great Western Steamship yard only to find the ship already “launched” and waiting for royal inspection. He boarded the ship, took refreshments in the elegantly decorated lounge then commenced his tour of inspection. He was received in the ship’s banqueting room where all the local dignitaries and their ladies were gathered.

After the initial success of its first liner, SS Great Western of 1838, the Great Western Steamship Company collected materials for a sister ship, tentatively named City of New York. The same engineering team that had collaborated so successfully on Great Western—Isambard Brunel, Thomas Guppy, Christopher Claxton and William Patterson — was again assembled. This time however, Brunel, whose reputation was at its height, came to assert overall control over design of the ship — a state of affairs that would have far-reaching consequences for the company. Construction was carried out in a specially adapted dry dock in Bristol, England.

Two chance encounters were to profoundly affect the design of Great Britain. In late 1838, John Laird’s 213-foot (65 m) English Channel packet ship Rainbow — the largest iron-hulled ship then in service — made a stop at Bristol. Brunel dispatched his associates Christopher Claxton and William Patterson to make a return voyage to Antwerp on Rainbow to assess the utility of the new building material. Both men returned as converts to iron-hulled technology, and Brunel scrapped his plans to build a wooden ship and persuaded the company directors to build an iron-hulled ship.

Great Britain‘s builders recognized a number of advantages of iron over the traditional wooden hull. Wood was becoming more expensive, while iron was getting cheaper. Iron hulls were not subject to dry rot or woodworm, and they were also lighter in weight and less bulky. The chief advantage of the iron hull was its much greater structural strength. The practical limit on the length of a wooden-hulled ship is about 300 feet, after which hogging—the flexing of the hull as waves pass beneath it — becomes too great. Iron hulls are far less subject to hogging, so that the potential size of an iron-hulled ship is much greater. The ship’s designers, led by Brunel, were initially cautious in the adaptation of their plans to iron hulled-technology. With each successive draft however, the ship grew ever larger and bolder in conception. By the fifth draft, the vessel had grown to 3,400 tons, over 1,000 tons larger than any ship then in existence.

Like other steamships of the era, Great Britain was provided with secondary sail power, consisting of one square-rigged and five schooner-rigged masts — a relatively simple sail plan designed to reduce the number of crew required. The masts were of iron, fastened to the spar deck with iron joints, and with one exception, hinged to allow their lowering to reduce wind resistance in the event of a strong headwind. The rigging was of iron cable instead of the traditional hemp, again with a view to reducing wind resistance. Another innovative feature was the lack of traditional heavy bulwarks around the main deck; a light iron railing  both reduced weight and allowed water shipped in heavy weather to run unimpeded back to sea.

The hull and single funnel amidships were both finished in black paint, with a single white stripe running the length of the hull highlighting a row of false gunports. The hull was flat-bottomed, with no external keel, and with bulges low on each side amidships which continued toward the stern in an unusual implementation of tumblehome — a result of the late decision to install propeller engines, which were wider at the base than the originally planned paddlewheel engines.

Brunel, anxious to ensure the avoidance of hogging in a vessel of such unprecedented size, designed the hull to be massively redundant in strength. Ten longitudinal iron girders were installed along the keel, running from beneath the engines and boiler to the forward section. The iron ribs were 6 by 3 inches (15.2 cm × 7.6 cm) in size. The iron keel plates were an inch thick, and the hull seams were lapped and double riveted in many places. Safety features, which also contributed to the structural strength of the vessel, included a double bottom and five watertight iron bulkheads. The total amount of iron, including the engines and machinery, was 1,500 tons.

Source: A Stamp a Day, Wikipedia