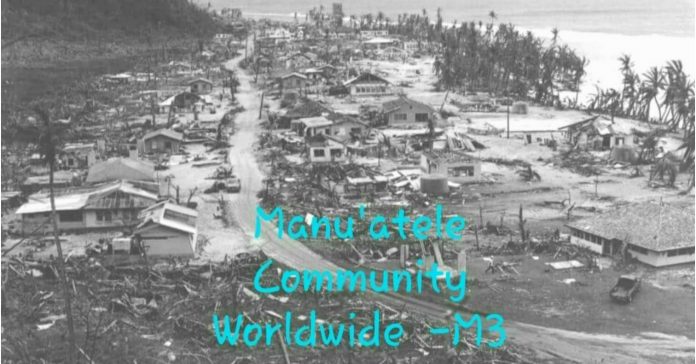 On 17 January 1987 a category 5 cyclone slammed the Manu’a islands causing roughly $80 million in damage to the mostly to the island of Ta’u with lesser damage in Ofu and Olosega. The villages of Faleasao and Ta’u had their entire infrastructure destroyed and, from what I have been told, the church tower in Ta’u was the only structure left standing.

Despite the extensive damage there were miraculously no deaths as a result of the storm. The villages have rebuilt and are thriving, but there is still a feeling of gratitude in Manu’a for the lives that were spared that day. January 17th is now an unofficial holiday for the people of Manu’a and is marked by an all day sa (meaning forbidden or sacred in Samoan). Sa is a curfew of sorts that is typically observed daily for about 15 minutes, but is extended on occasion. On January 17th sa runs from midnight to dusk. During this time no one is to leave their homes for any reason or they risk a fine from the village. Anyone who finds themselves in a situation that would require them to leave their homes needs to call the aumaga, a male in the village that is below the mati (chief) and is responsible for many duties within the village. He will either escort you through the village or run your errand for you.

While at first glance the day-long sa may seem restrictive it is also a good example of how deep pride and honor run in the Samaon culture and how engrained religion is in the everyday lives of the people here. Instead of the typical moment of silence taken to remember tragic events, the people of Manu’a have dedicated an entire day to reflecting and thanking God for what they have been given and for sparing both their lives and the lives of their loved ones.

But God doesn’t go un-thanked the other 364 days of the year. Like I mentioned earlier, sa is observed every day for a short period of time. Every night shortly before sunset the bell (an empty oxygen tank hung in the middle of the village) is rung warning the village that sa will begin shortly and signaling everyone to make their way into their homes.

A few minutes later the second bell is rung signaling the beginning of sa. By this time you should be inside your house, but if for some reason you are caught outside you are required to sit down and observe sa where you are. About 10-15 minutes later the final bell is rung, which signals the end of sa and gives permission for the everyone to return to what they were previously doing. What each family does during sa is up to them, but the time is typically used for prayer and reflection.

Prayer is another aspect of Samoan culture that I have come to really value this year. First period always begins with the students singing a hymn and saying a prayer. This is one of my favorite parts of the day.

The sound of the students singing throughout the building is something I will never get sick of. Any ceremony or event also begins with a prayer. Before passengers were allowed on the MV Sili when we returned to Ta’u a passenger was called out of the group and asked to pray for a safe voyage. Parties and gatherings always begin with prayer and God is always thanked before food is served. Samoan tradition requires you sit before eating or drinking so that you will take time to appreciate the meal you have been given.

While there are some aspects of the religion here that I don’t always agree with, the deep sense of commitment to God and appreciation for what we have all been blessed with is something I am grateful for. Sa is a good daily reminder to stop and look around at the beauty I am surrounded by and reflect on the blessings I have in my life.

As a quick side note totally unrelated to Tusi, sa, or religion, I made my first night spear fishing trip this week and speared my first fish despite my slight fear of swimming in the dark with only an underwater flashlight. It was even enough fun that I think I’ll do it again.