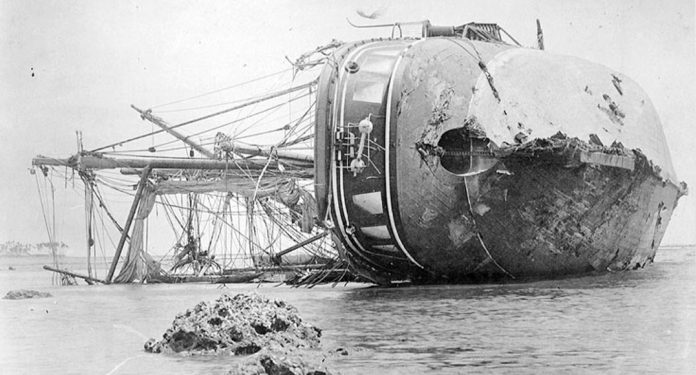 Today in History:  The violent cyclone of 16th March 1889, is a historical event remembered by locals as a divine intervention, that ended a standoff between the United States and Germany, by destroying six of the seven warships that had been docked in Apia Harbour.

Three of the warships belonged to the US Navy; the sloop-of-war USS Vandalia, the screw steamer USS Trenton, and the gunboat USS Nipsic.  The three German warships included two gunboats SMS Adler and SMS Eber and the corvette SMS Olga. They had kept each other at bay over several months in Apia Harbour, while under the watchful eye of the British corvette HMS Calliope.

The standoff ended when a cyclone hit on the night of the 15th to the 16th of March 1889, wrecking the three US and three German warships. Calliope was the only ship that managed to escape, sailing out of the harbour into the teeth of the storm.

Those who documented the event say the Calliope have been rendered for ever memorable by the episodes of disaster and gallantry that attended them by the escape of H.M.S. Calliope, which forced her way out of Apia. The US Navy reported 51 deaths amongst the crews of its warships, while all three German warships sank, killing 150.

During the days preceding the cyclone of March, increasing signs were visible of the impending disaster. March was cyclone season in this area, and Apia had been hit by a cyclone just three years previously, which the captains of the ships heard about from locals, especially as the weather began to change and the atmospheric pressure began to fall. The captains were experienced Pacific seamen, as were many members of their crews, and they all saw the approaching signs of impending disaster, just as they knew that the only chance they had of riding out the 100 mph (160 km/h) winds was to take to the open sea.

The captains knew Apia was an exposed harbour, unprotected by high ground or an enclosing reef. The northern part of the harbour is open to the Pacific, so the wind and waves easily swept through the area causing ships in the bay onto the reefs at the Southern end, or to be tossed right up the beach. However, even though the officers of the various navies were well aware of the necessary procedures in the face of such a threat, none made a move. This has been attributed to jingoism or national pride; none of the men in the harbour was willing to admit in front of the other nations’ navies that they were afraid of the elements, and so refused to take precautions.

Rear Admiral LA Kimberly of the US Navy in his report dated 19 March 1889, writes about brave Samoan men who risked their own lives to help navy officers on the various ships.

Teoteo, a Samoan of Apia, made a desperate attempt to swim off to the Vandalia with a line while the gale was at its height. The heavy surf, the jagged reef strewn with wreckage and swept by strong currents, through and over which he attempted to pass, made this effort one of exceeding danger, and in the futile attempt he nearly lost his life. I have learned of no greater risk of life for others being accepted by any one on this occasion, and I commend him to the favorable consideration of the Department, trusting that his bravery will be recognized in so enduring a manner that his example will be kept in memory and the spirit that animated him fostered and developed wherever acts of courage and sacrifice are cherished. In his intrepid effort Teoteo was assisted in the management of the line by Toga, a native of Samoa, whose father was a Tongan.

Charles Fruen, sr., a native of Apia, saved the life of Surgeon E.Z. Derr, of the Nipsic, and in doing so risked his own.

Seumanutafa, chief of Apia, and Selu Leauanae did excellent service in saving life, and took the lead in directing the work of the natives. They organized boats’ crews and carried out the suggestions of the offices. Seumanutafa took charge of and steered the boat which was the first to carry lines to the wreck in the early morning of the 17th, while it was yet dark, and the passage across the reef and approach to the Trenton was beset with difficulty and danger.

All the Samoans were faithful, alert, and diligent in their efforts to save life and assist the unfortunate people. Conspicuous among them were the following:

Of the foreign residents of Apia, the United States vice-consul, Mr. W. Blacklock, was pre- eminently conspicuous for his energy and good services, not only in saving life, but in caring for the immediate and pressing wants of the survivors of the Vandalia, the most of whom were taken to the consulate. Too much cannot be said in justice to his exertions and hospitality on this occasion.

Mr. J.P. Dunning, correspondent of the Associated Press, and Messrs. H.J. Moore, Albert Vicking, Peter Paul, and J.S. Pike, of Apia, were conspicuous in the work of saving life and property, and deserve particular mention in this regard for most praiseworthy services.

I have also received the most valuable assistance from Malietoa Mataafa [Samoan chief] who has sent a large number of his men to help in getting stores and public property from the ships.

Report of wreckage and lives lost on warships

Only HMS Calliope escaped, making less than one knot against the oncoming wind and sea; she dragged herself to the open sea, despite being less than six feet from a reef at one point. Once out at sea she was easily able to ride out the ensuing winds. Her survival is attributed to her size (2,227 tons) and her more powerful and modern engines, built only five years before, as compared to the ten or twenty years for many of the other ships.