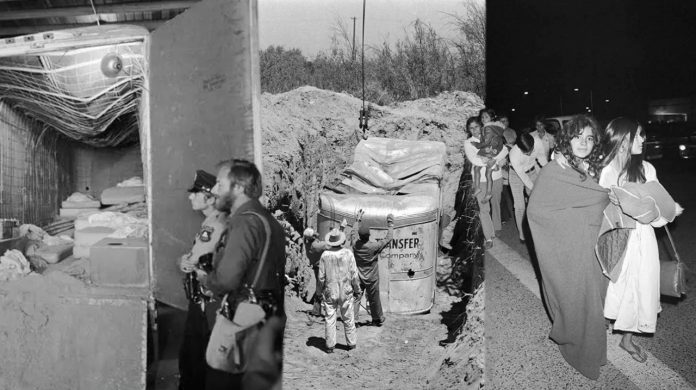 The 1976 Chowchilla kidnapping was the abduction of a school bus driver and 26 children, ages 5 to 14, in Chowchilla, California, United States, on July 15, 1976. The kidnappers held their captives in a box truck buried in a quarry in Livermore, California, intending to demand a ransom for their return. After about 16 hours underground, the driver and children dug themselves out and escaped.

At around 4 p.m. PDT on Thursday, July 15, 1976, school bus driver Frank Edward “Ed” Ray was driving 26 students of Dairyland Elementary School home from a summer class trip to the Chowchilla fairgrounds swimming pool when a van blocked the road ahead of the bus. Ray stopped the bus and was confronted by three armed men with nylon stockings covering their faces. One of the men held a gun to Ray while another drove the bus; the third man followed in the van.

The kidnappers hid the bus in the Berenda Slough, a shallow branch of the Chowchilla River, where a second van had been parked. Both vans’ back windows were painted black; their interiors were reinforced with paneling. Ray and the children were forced into the two vans at gunpoint and then driven around for 11 hours before being taken to a quarry (37°39′48″N 121°48′29″W) in Livermore.

There, in the early morning of July 16, the kidnappers forced the victims to climb down a ladder into a buried moving truck that they had stocked with a small amount of food and water and some mattresses.

Ray and the older children later stacked the mattresses so that some of them could reach the opening at the top of the truck, which had been covered with a heavy sheet of metal and weighed down with two 100 lb (45 kg) industrial batteries. After hours of effort, Ray and the oldest boy, 14-year-old Michael Marshall, wedged the lid open with a piece of wood and moved the batteries; they then dug away the remainder of the debris blocking the entrance. Sixteen hours after they had entered the truck, the group emerged and walked to the quarry’s guard shack, near Shadow Cliffs Regional Park.

The quarry owner’s son, 24-year-old Frederick Newhall Woods IV, quickly came under suspicion as one of the people who had keys to the quarry and enough access to have buried the moving truck there.

He and two of his friends, brothers James and Richard Schoenfeld (aged 24 and 22 respectively), had previously been convicted of motor vehicle theft, for which they had been sentenced to probation. A warrant was executed on the estate of Woods’ father, and there police recovered one of the guns used in the kidnapping as well as a draft of a ransom note, but the three men had fled. Woods was caught two weeks after the kidnapping in Vancouver, British Columbia, Canada.James Schoenfeld had been captured earlier the same day in Menlo Park, California, while Richard Schoenfeld had voluntarily turned himself in to authorities eight days after the kidnapping.

The kidnappers had been unable to call in their intended ransom demand of $5 million (equivalent to $23.8 million in 2021) because telephone lines to the Chowchilla Police Department were tied up by media calls and families searching for their children. They went to sleep at some point on July 16 and woke late that night to television news reports informing them that the victims had freed themselves and were safe.

All three perpetrators pleaded guilty to kidnapping for ransom and robbery, but they refused to plead guilty to infliction of bodily harm, as a conviction on that count in conjunction with the kidnapping charge carried a mandatory sentence of life in prison without the possibility of parole. They were tried on the bodily harm charge, found guilty and given the mandatory sentence, but their convictions were overturned by an appellate court which found that physical injuries sustained by the children (mostly cuts and bruises) did not meet the standard for bodily harm under the law. They were re-sentenced to life with the possibility of parole. Richard Schoenfeld was released in 2012 and James Schoenfeld was paroled on August 7, 2015.