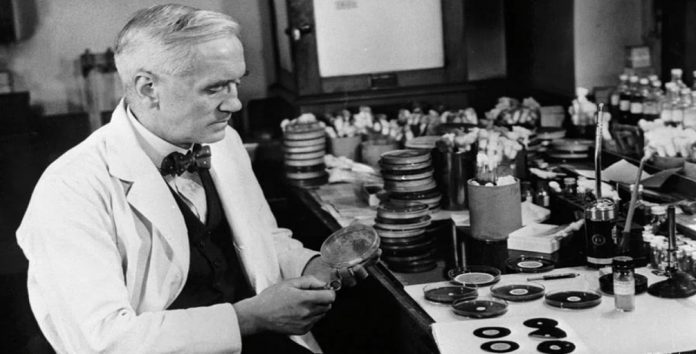 14 March 1942 – marks the day Anne Sheafe Miller, made medical history as the first patient ever saved by penicillin. She then lived to be 90.

In 14 March, 1942, Mrs. Miller was near death at New Haven Hospital suffering from a streptococcal infection, a common cause of death then. She had been hospitalized for a month, often delirious with her temperature spiking to nearly 107, while doctors tried everything available, including sulfa drugs, blood transfusions and surgery. All failed.

As she slipped in and out of consciousness, her desperate doctors obtained a tiny amount of what was still an obscure, experimental drug and injected her with it. Her hospital chart, now at the Smithsonian Institution, registered a sharp overnight drop in temperature, and by the next day she was no longer delirious and soon was eating full meals, one of her doctors reported.

Mrs. Miller’s life was saved, and so eventually were the lives of all those previously felled by infections of bacteria like streptococci, staphylococci and pneumococci. Penicillin also saved the lives of an untold number of servicemen and civilians wounded in World War II; in earlier wars, people died by the thousands from bacterial infections resulting from their injuries.

Although Sir Alexander Fleming, the Scottish biologist, was the first to recognize the therapeutic potential of penicillin through a chance discovery at St. Mary’s Hospital in London in 1928, nearly a dozen years passed before scientists fully appreciated its significance and were able to produce it for experimental use in humans.

Largely forgotten, it came to the fore only when researchers picked up on it again at Oxford University at the outbreak of World War II.

Before Mrs. Miller’s doctors succeeded in saving her life, only a few experiments had been conducted with penicillin in mice and people, with results mixed and largely disheartening.

A native New Yorker, Mrs. Miller graduated in 1931 from Columbia Presbyterian School of Nursing, now part of Columbia University. The next year, she married Ogden D. Miller, a Yale University administrator. The family moved to Washington, Conn., in 1945, when Mr. Miller became headmaster of the Gunnery School, where he served until he retired in 1969. He died nine years later, and Mrs. Miller remained in Washington until 1996, when she moved to a retirement community in Salisbury.