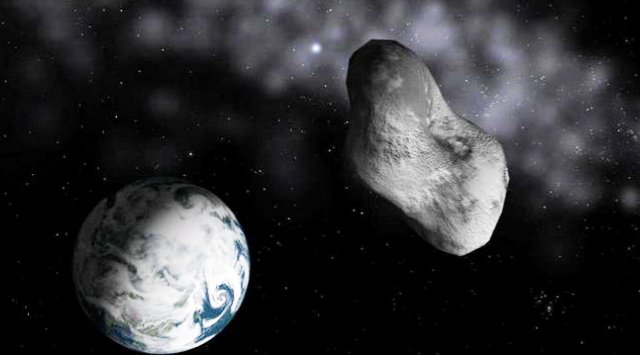 On this day 14 June 2002 an asteroid the size of a football pitch made one of the closest ever recorded approaches to Earth.

Astronomers working on the LINEAR search programme, near Socorro, New Mexico first detected the giant rock on 17 June, a few days after its close approach.

Asteroids are typically too small and distant to measure their size directly from Earth, so scientists use the amount of light they reflect, along with a basic understanding of the materials they are made of, to estimate their size. With a diameter between 50-120 metres, 2002 MN is a lightweight among asteroids and incapable of causing damage on a global scale, such as the object associated with the extinction of the dinosaurs.

However, if it had hit the Earth, 2002MN may have caused local devastation similar to that which occurred in Tunguska, Siberia in 1908, when 2000 square kilometres of forest were flattened. Whilst the vast majority of NEOs discovered do not come this close, such near misses do highlight the importance of detecting these objects.

This reminder comes in a week when the UK telescopes on La Palma are being tested to search for NEOs.

According to Reuters said several million miles (km) away, according to Brian Marsden of the Harvard-Smithsonian Center for Astrophysics’ Minor Planet Center, which tracks asteroids.

“It’s the largest (asteroid) we’ve seen at that distance in the last several decades,” Marsden said in a telephone interview.

The last time any asteroid came this close was in 1994, according to the Near Earth Object Information Center in Britain.

The big rock, with a diameter of roughly 50 yards (metres) to 120 yards (metres), would not have caused global catastrophe if it had struck Earth. That would take an asteroid of several miles (km) diameter.

However, if it had hit Earth, it had the potential to cause as much local devastation as a 1908 hit in Tunguska, Siberia, which flattened some 800 square miles (2,000 square km) of forest.

Asteroid 2002MN was first spotted by the Lincoln Near Earth Asteroid Research (LINEAR) program, based in Socorro, New Mexico.

It’s a good thing it missed the Earth, because we never saw it coming,” Steve Maran of the American Astronomical Society said in a telephone interview. “The asteroid wasn’t discovered until three days after it passed its closest approach to our planet.”

LINEAR is part of the National Aeronautics and Space Administration’s initiative to find 90 percent of all near-Earth objects, including asteroids, that measure .62 mile (1 km) or more in diameter by 2008.

An asteroid the size of 2002MN may hit Earth about once every hundred years or so, and the planet may not have seen the last of this one, Marsden said.

“At some level, it behooves us to look out for these things,” he said.

Asteroid 2002 MN will be observable by some telescopes but it is getting fainter as it moves away, Marsden said.